Addis Ababa–Djibouti Railway a road to prosperity, BRI boost ‘speedy’ transformation in Africa in past decade

In 2013, Chinese President Xi Jinping put forward the “Belt and Road Initiative” (BRI), aiming at building a new platform for international cooperation and creating new momentum for shared development. Since then, the BRI has opened a path for high-quality development and common prosperity for countries along the route, becoming a real global platform serving over half of the world’s population.

To date, nearly 40 African countries have signed memorandum of understanding to join the initiative, and BRI has aided the continent in breaking through developmental bottlenecks and boosted global value, industrial and supply chain integration. The opening of the Addis Ababa-Djibouti Railway in 2018 is a vivid display of how BRI has symphonized with Africa’s developmentover the past decade.

This is the fourth in a series about a monumental decade for the BRI. 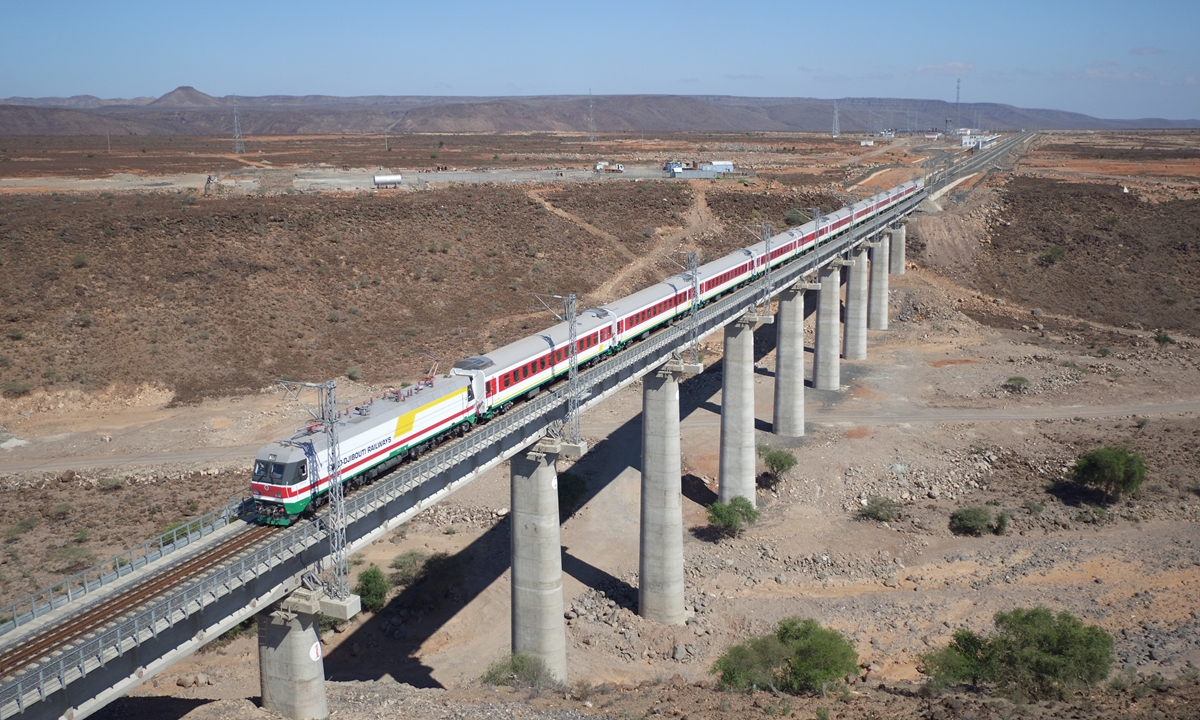 A view of the Addis Ababa-Djibouti Railway Photo: Courtesy of China Civil Engineering Construction Corporation
On Thursday morning, a cargo train loaded with bulk quantities of coffee, avocados, and marble departedfrom Addis Ababa, the capital of Ethiopia, heading eastward toward Djibouti port – one of the largest modern ports in East Africa – at a speed of 120 kilometers an hour.

Dejene Gezu Yirgu, an Ethiopian local aged 34 who drives the train, can still recall the excitement, earnestness and applauses on January 1, 2018, when the Addis Ababa-Djibouti Railway – the very first electrified railway in Africa and a mega flagship project under the Belt and Road Initiative (BRI) – made its maiden voyage that day and marveled passengers with “speedy riding experience.”

Yirgu, who received training at a Chinese railway vocational and technical school and became the first-ever group of certificated national electrified train drivers in Ethiopia in May 2021 after graduating, told the Global Times on Wednesday that the train is a “game-changer,” not only for fulfilling his dreams but also for how it unfolds a “remarkable transformation” in East Africa.

With a total length of 752 kilometers and an investment totaling $4.08 billion, the railway significantly reduced the transportation time from Addis Ababa in inland Ethiopia, also the most populous country in East Africa with over 110 million people to Djibouti – which is home to one of the most important ports in Arica— to only 10 hours. Previously, transportation between the two countries took more than seven days, via shared roads and a 1-meter narrow gage railway built in the 19th century.

The Addis Ababa-Djibouti Railway, with both passenger and freight services, also reshaped the geographic position of Ethiopia in marine traffic network, enabling sea-rail combined transportation service model under which cargos sail from Asia countries including China via the Indian Ocean and Arabian Sea to Djibouti ports, and then transferred through the line to the hinterland of East Africa. It also consolidated Djibouti’s position as a regional logistics hub, which some envisioned could be further built into “Dubai of Africa.”

‘Golden passage’
“The rail line has now become ‘golden passage’ of East Africa and a road to prosperity,” a spokesperson from China Civil Engineering Construction Corporation (CCECC) told the Global Times on Thursday. A consortium formed by CCECC and the China Rail Engineering Corporation, had jointly completed the construction of the rail line in six years and the group also signed a six-year operation contract with the governments of Ethiopia and Djibouti in July 2016.

As China-proposed BRI and Ethiopia’s 10-year development plan is synergized, more than 10 industrial parks some of which are invested in by Chinese firms, are also being established along the rail line, paving way for the development of light manufacturing and industrialization – a key vision in Ethiopia’s future blueprint.

At the Second Belt and Road Forum for International Cooperation in April 2019, the railway, along with the neighboring industrial parks, is also recognized as one of “economic corridors facilitated and supported by connectivity,” according to a joint communiqué issued after the forum.

The Addis Ababa-Djibouti Railway currently operates two two-way passenger trains and three to four cargo trains a day. Over the recent two years, the rail cargo shipment has bucked a global sliding side, further gaining momentum despite the fallout of epidemic.

According to data provided by CCECC, the rail has facilitated 463,096 trips and 6.46 million tons of goods as of June 2022 since entering operation, with transportation income expanding 35 percent in annual terms. In the first half of 2022, revenue from freight transportation rose 9.3 percent year-on-year.

“In November, our transportation income hit $10 million, driving the annual income to reach 1.93 billion birrs ($38.6 million) last year. Based upon the performance, we’re heading toward a goal of 2.3 billion birrs in income, and when we meet the goal, it means the cash flow of cost and revenue would achieve a balance and we will begin to make a profit,” a CCECC spokesperson explained.

‘Teach them how to fish’
The successful operation of the Addis Ababa-Djibouti Railway also marks a milestone in showcasing the prowessof Chinese railway and infrastructure technology.

According to industry observers, it was the first export of China’s entire rail industrial chain from financing, designing, building, training, operating and maintaining to Africa, which plays a demonstration effect in elevating the overseas reputation of Chinese railway standards.

Following the Addis Ababa-Djibouti Railway, Chinese firms have also constructed a number of railways in Africa adopting Chinese standards, including the Mombasa-Nairobi Standard Gauge Railway, the first railway in Kenya since its independence in 1963.

CCECC said its very first infrastructure project in Arica could be traced back to the 1960s. Chinese companies have been making billions in investment in Africa since that time, and this pace has further accelerated under the BRI, which dwarfs most Western countries and the IMF both in terms of the investment scale and the generated economic efficiency.

“Unlike investment by other countries, the BRI addresses interests and concerns of every party. We don’t eye short-term benefits or are driven by speculation, but cooperate in key infrastructure and projects for public well-being that will serve as long-term locomotives for African economy,” CCECC said, adding that the core of the initiative is “negotiation” rather than a single party dominating.

Like the experience of Yirgu, Chinese companies have helped to train 3,600 locals through railway project, and 90 percent staff members of the Addis Ababa-Djibouti Railway are hired locally, according to CCECC.

“I’m impressed by the dynamics injected by Chinese firms to Africa’s development in the past decade. They created thousands of job opportunities, build up local teams and contributed to our fight against poverty,” Samuel Biru, the director of the construction bureau of Addis Ababa-Djibouti Railway, told the Global Times on Thursday. “Witnessing how the Addis Ababa-Djibouti Railway started from the scratch also brightened my hopes for a better life in the future.”

A Day After Launching Power Production From The 2nd Turbine, Ethiopia Completed The 3rd Filling Of GERD

What is heirloom coffee?

China-Africa Cooperation Advancing to Peace Support in The Horn

Father Spyridon: The mother of God