The Amazing Bale Mountains, the home of Ethiopian Wolf and Honey Badgers

At first, it’s a speck on the landscape, a barely tangible tangerine blur beyond tufts of alpine shrubs. I try not to get too excited. My first wolf sighting turned out to be a rock flecked with ginger moss – the perfect camouflage for the world’s rarest canid. This time, however, it seems to be the real deal. It’s moving, at least.

“Look,” Eyob, our guide, whispers, as if the creature might hear us from 100 feet away. I roll down the car window and scan across boulders and bushes with my binoculars. Finally, I land on my target – a male Ethiopian wolf, slinking across the plateau. White-socked legs and a tail tipped in black contrast with the rich copper hue of his coat. He is strikingly beautiful – like an especially elegant fox.

There are fewer than 500 Ethiopian wolves remaining in the wild, with the majority found here on the Sanetti Plateau in Bale Mountains National Park. It’s a long slog from the capital, Addis Ababa. There’s no airport, so the only option is a 200-mile or eight-hour drive. The route skims past the lakes of the Rift Valley, through villages with tuk-tuks and spearmint houses, and alongside endless fields of wheat and teff (used to make injera, the ubiquitous spongy flatbreads).

It’s well worth the effort. The area is home to some of Ethiopia’s rarest and most fascinating wildlife. Endangered black-maned lions have been spotted in Harenna, a cloud forest carpeting the slopes below the plateau. Sage-like colobus monkeys stare behind snowy white beards, while tiny Bale monkeys hide among the bamboo. 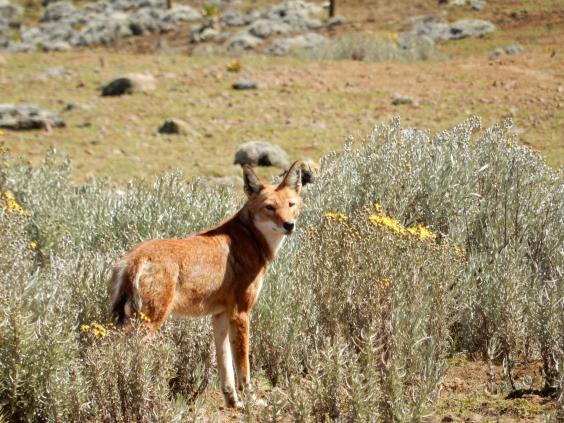 At the heart of it all, Bale Mountain Lodge has chalets discreetly arranged around a forest clearing. My treehouse room gazes across moss-draped branches to Mount Gusharelle, plunging to a meadow where cows and donkeys graze by a trickling stream. There’s an embarrassment of beauty here, and the lodge’s owners aim to make it easier to discover. The wolves are the big draw, of course. But another spectacle fascinates me – the area’s unique honey harvest. Tubular hives are handwoven with bamboo and smoked with beeswax, to better attract the queen, before being placed high in tree canopies, away from honey badgers. The lodge organizes tours to witness the harvest, which happens around June and December. But you can have a guided walk to the hives at any time of year.

As the sun begins to dip, I follow beekeeper Sa’id deeper into the forest. Fig trees and bushes of giant heather, clothed in velvety moss, twist their gnarly branches as if frozen mid-dance.

En route, Sa’id stoops to gather handfuls of moss and lichen, wrapping the bundle with twine and lighting it to create a makeshift torch for smoking out the bees. Barefoot and equipped with a single rope, he shimmies around 20 feet up a huge Hagenia abyssinica tree to reach one of his hives, wafting his torch before reaching in to retrieve the honeycomb. 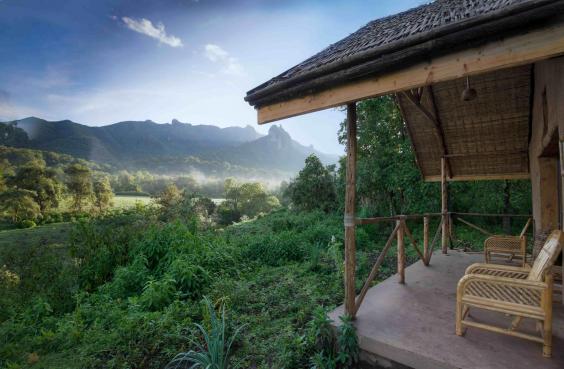 “Generations have been gathering honey like that,” lodge owner Guy Levene tells me later over a glass of hot wine by the fire pit. After coffee, which grows wild here, honey is the second biggest source of income for the 600 or so families who live in the forest. The abundance of endemic blossoming trees and flowers in this region produces complex, fragrant varieties. Levene is keen to help beekeepers make more money and possibly export the honey. In Rira, a village halfway between the lodge and the Sanetti Plateau, the Slow Food Foundation has founded a cooperative of local beekeepers, focusing on improving safety and quality.

The relationship between man and nature is complex here, and delicate. Rira is just outside the national park, yet other villages lie within its borders. Conservationists are working to help relocate families, concerned their presence is a threat to the wolves. The graceful creatures are already the most endangered of all African carnivores, at risk from diseases such as rabies and habitat encroachment. Agriculture and grazing animals have overtaken swaths of land, forcing the wolves to ever-higher altitudes.

Despite their rarity, the wolves are pretty easy to spot on the open landscape of the Sanetti Plateau. When not hunting giant mole-rats, which are endemic and abundant here, the wolves doze among the bouncy white heather. At this early hour, when a chilly mist still shimmers in the air, they are awake and on the hunt. 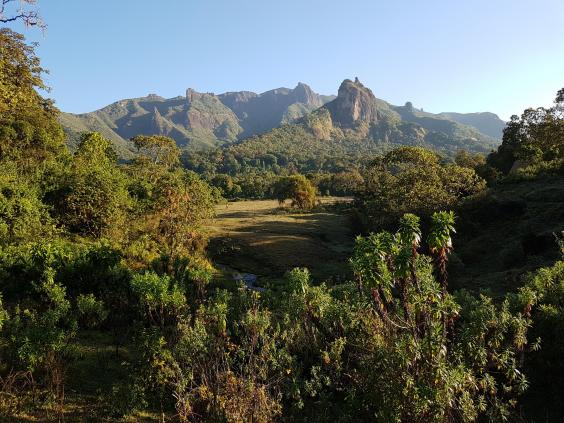 Further down the dirt path, a female emerges from her makeshift heather bed, ears pricked. The animals are even more majestic up close. She fixes us with bright amber eyes before dipping back behind the flowers. The wolves are retreating for their afternoon naps. It’s our cue to leave.

We stop in Rira to try the local honey. It’s a deep golden color, fragrant and citrusy. Mopping up the syrup with ambasha flatbread, Eyob tells me about his friend Biniam, a conservationist dedicated to the wolves. In 2015, a fire broke out on the mountainside and was spreading towards the plateau. Biniam fought to battle away from the flames, staying when others ran for cover. The fire burnt out and the wolves survived. Biniam did not.

“He sacrificed his life for the wolf,” says Eyob. “He always said he would die for them. They are such beautiful creatures.”

The 320,000 years old Stone Tools Are Smashing Theories about Africa Ethiopian photographer crafts photos through the lens of truth

Ethiopia will win the war

Why Such Intense Foreign Interference In Ethiopia?

The First Pillar of the Biden Administration’s Policy in Ethiopia: Regime Change and Restoration of the TPLF to Power by “Dialogue”, “Negotiation” or “Any Means Necessary”

Ethiopia: The Afrikan Nation That Europe Could Not Conquer