Six months since the corona virus pandemic upended the global airline industry, Ethiopian Airlines is facing a heavy toll: more than $1 billion in lost revenue, to say nothing of 850 infected employees.

Yet Tewolde Gebremariam, CEO of the state-owned airline and jewel of Ethiopia’s economy, maintains the situation would have been far worse if it had not rapidly adapted to a 90 percent drop in international passenger traffic.

“We were very quick, very fast, flexible and agile to move our forces, resources and everything to cargo,” Tewolde told AFP in an interview.

“I would say that those actions have saved the airline.”

So far Ethiopian has avoided seeking a bailout, laying off any full-time employees or requesting deferrals on debt payments, Tewolde said.

It even reported a profit of $44 million (37 million euros) for the first half of the year, he said, although the company declined to give details because the figures are not-audited.

But as the industry attempts to recover, he is looking to deepen ties with other African carriers, notably beleaguered South African Airways (SAA).

“It is… an opportune time now to support other airlines because we are in a better position,” he said.

In addition to stripping out seats from 25 passenger aircraft, it enlisted 20 more planes whose seats were left in place and the cargo was secured with safety belts.

“Ethiopian could react with more agility than other airlines because it has always been run like a business,” said Chiedza Madzima, head of operational risk at Fitch Solutions.

“There’s a significant role of the state, but there’s very limited state interference in the way Ethiopian Airlines is run.”

The airline was further aided by the UN’s decision to open a humanitarian transport hub in Addis Ababa in April.

And once a vaccine is approved, Ethiopian plans to make available “at least 40 airplanes” to distribute it globally.

Ethiopian has been closely watching other African carriers’ response to the Covid-19 crisis.

Ethiopian already partners with Malawian Airlines and ASKY Airlines out of its hub in Togo.

It also holds a 45-percent stake in Zambia Airways which Tewolde said he expected would launch “either in October or November”.

But Tewolde lamented that African carriers currently only meet about 20 percent of the continental market’s needs.

With that in mind, Ethiopian is in talks over the restructuring of SAA, which has survived only through years of state bailouts. 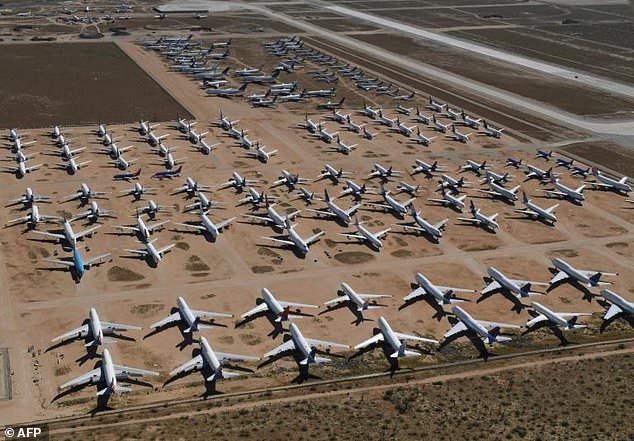 Parking lots for unused airliners, known as ‘boneyards’, have filled up because of the corona virus

In July, SAA’s creditors approved a rescue plan that would replace it with a new and competitive carrier.

Tewolde said Ethiopian had made clear to South African officials that it was “not interested in equity” or in helping SAA manage its debt.

“We told them that we can give them management expertise, technical expertise, fleet and we can work on a commercial collaboration to restart South African Airways together,” he said.

“We are interested only in the restart of the new airline at the beginning of next year.”

The International Air Transport Association (IATA) has reported a 58.5-percent drop in passenger demand in Africa for 2020.

“We’re unlikely to see passenger levels return to 2019 levels for the next three to four years,” said Madzima.

Ethiopia never closed its borders to international travel, but closures elsewhere meant the airline missed out on its normal summer peak, and it remains cut off from “very important markets” like China, India, South Africa and Saudi Arabia, Tewolde noted.

Even for flights that are running, he said, load factors are “less than 40 percent”.