Gebremeskel Tesema, a priest and hermit, has been carving churches out of the solid bedrock at Dagmawi Lalibela in Ethiopia since 2011. Located in the Amhara Region in the north of the country, Dagmawi Lalibela is a series of five subterranean churches connected by open courtyards, short passageways and trenches. The rock – a grey, clay-like deposit – gives way to courtyards up to 6 metres deep from which sculpted spaces extend into darkness, interrupted only by the play of natural light on relief carvings, columns, arches and roof beams, some with ceilings up to 5.5 metres high. Barefoot, the sheer mass is cold to the touch. The faithful, draped in white cloth, bow their heads against columns or fling themselves on the floor in prayer.

While biblical reference indicates the presence of Christian worship in what is now known as Ethiopia as early as the first century, Christianity was formally adopted in 341, making Aksum – spanning across parts of modern-day Ethiopia, Eritrea and Sudan – the second country to do so after Armenia. Rock-hewn churches are thought to have emerged following the decline of the Aksumite Empire, which coincided with the rise of Islam in the seventh century. The Arab invasion stretched across North Africa as far west as Morocco and expanded into modern-day Somalia, Somaliland and Ethiopia.

Lalibela in the Amhara region of Ethiopia is home to 11 churches cut into the volcanic tuff bedrock, including Beta Giyorgis, carved in the 12th century.

This marked the beginning of the isolation of Christianity in Ethiopia that lasted until the 20th century. At a time when Christianity was flourishing in Europe, the Ethiopian Orthodox Tewahedo Church was forced – literally – underground. The decision to carve places of worship out of the sanctity of a cliff face or rock outcrop was driven by a need for a hidden, indestructible architecture and a desire for spiritual isolation, as well as an existing inhospitable mountainous terrain.

The site for Dagmawi Lalibela was chosen due to a nearby cave-church attributed to King Lalibela, the 13th-century ruler and saint who was also accredited with the building of the world famous rock-hewn churches in Lalibela town, 40km north of the site. The necessity for ‘holy’ water on-site, available only on sacred sites, has meant few sites are entirely ‘new’, and the establishment of a new church most often replaces a nearby disused built or rock-hewn structure.

The process of creating a rock-hewn church is often a top-to-bottom excavation: the initial point of entry later forms an upper window as craftspeople continue to carve the church below. At the old courtyard churches of Lalibela, both exterior and interior were probably carved simultaneously in this manner, eliminating the need for scaffolding. The church of Beta Giyorgis, part of the new Dagmawi Lalibela complex, had a height of 2.5 metres in 2015, and was extended to 5 metres in 2017; the square opening that once provided access became an upper window, and integrated seating at the foot of arched walls now forming bracket capitals to the newly carved columns below.

While most sites employ this method, the opposite has also been recorded. At Maryam Shewito, a large church currently being carved in Tigray, which was broken in to the rock to create an entrance, the excavated slag forms a platform from which the craftspeople continue to carve overhead. On achieving the desired height and having carved patterns into the ceiling, upper walls and column shafts, the slag is removed to expose the church in its entirety.

The churches at Dagmawi Lalibela belong to more than forty to have been carved since the mid-1980s. The variety and unusual arrangement of spaces at Dagmawi Lalibela reflects a willingness for experimentation; the site demonstrates a high level of craftsmanship seldom realised in churches carved in recent decades. The church ceilings and courtyard walls are richly decorated with a hieroglyph-like relief carved using simple hand-held tools, sharpened over a fire using bellows. Ceiling domes are achieved by fixing a piece of wood in the rock and using string to mark out the circle – a method possibly employed in churches from the eighth to 15th centuries, which were adorned with domes and cupolas. The excavation of rock and intricate relief carving is done without artificial light and no architectural drawings are used.

While new churches in Tigray borrow their form from the basilica – a rectangular church with a high central nave flanked by aisles and an apse or sanctuary to one end – churches in Amhara and Oromia do not. The church plan at Etysa in Oromia is noteworthy as it reflects the relatively recent Ethiopian rectangular church, a liturgical development of the basilica that places the maqdas (sanctuary) centrally rather than at the far east. Etysa is carved into the east face (rather than cut downward) and is entirely turned within the rock. The church has no windows and is austere yet spacious. An upper level to the far end has inspired a bowed ceiling from west to east, more like draped cloth than solid stone.

Cost, both during construction and in ongoing maintenance, plays a decisive role in the establishment of a rock-hewn church. In rural Ethiopia, it is often simply cheaper to carve a new church than to build one: the presence of readily available material (stone) removes the need to purchase, import or transport costly building materials, and the fact that rock hewn churches last almost indefinitely means they require little to no upkeep once complete. While costs are incurred where contracted craftspeople are concerned, no labour costs are associated with churches carved by religious hermits. 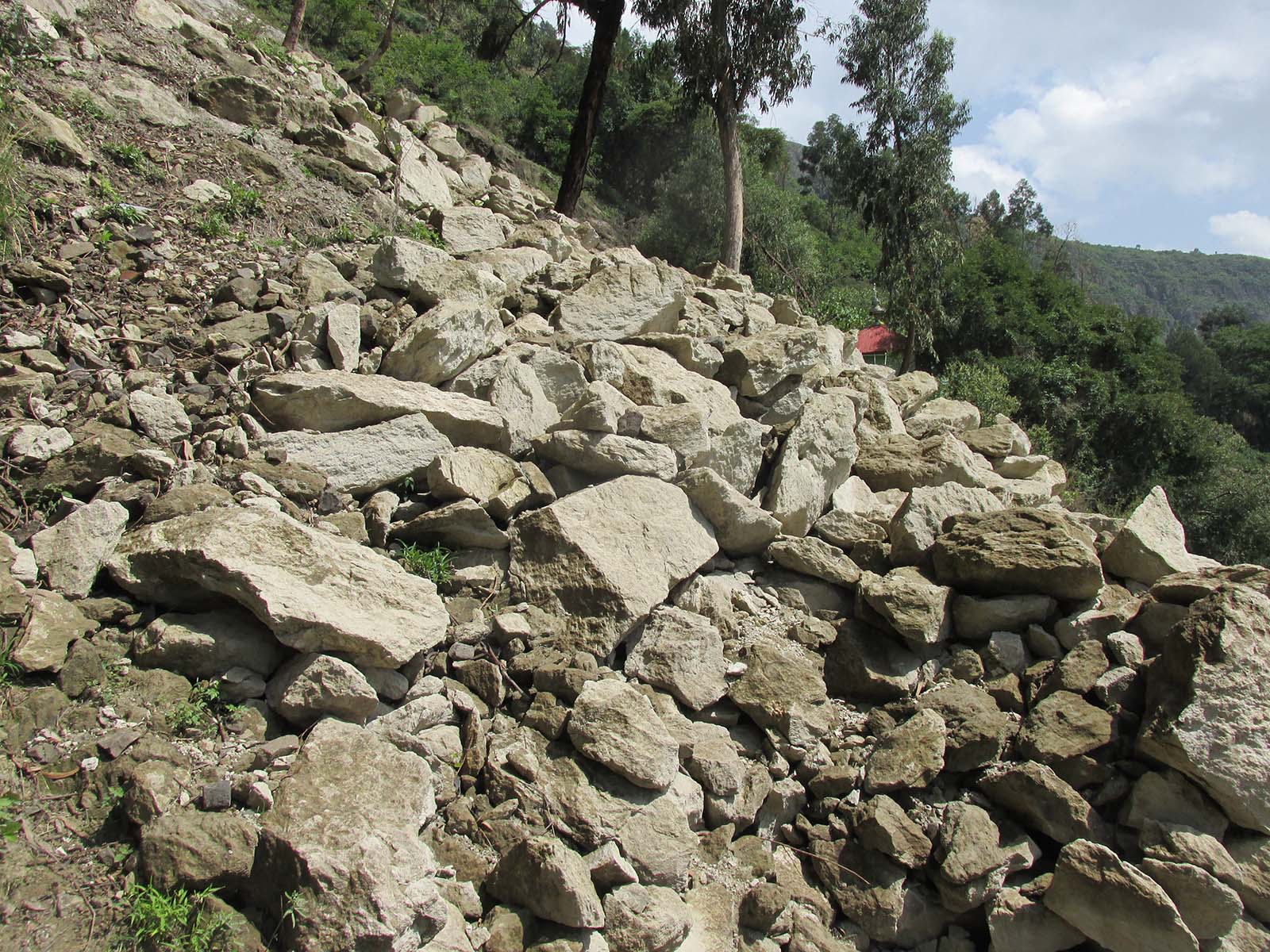 Large pieces of stone, excavated to form the courtyard in front of Etysa, sit discarded at its foot

A significant number of craftspeople are active today and there is an apparent resurgence of this tradition across Christian Ethiopia. It is likely that the practice of carving churches out of rock has endured intermittently to the present day; it has simultaneously resurged in isolation, with craftspeople and priests usually unaware that other rock churches have recently been carved nearby, let alone in other linguistically differentiated regions.

Craftspeople in Amhara and Oromia are solely driven by religious vocation, often choosing to distance themselves from society and carve single-handedly. Typically, as work progresses, support from the community grows and contributions are made in the form of provisions. In contrast, craftspeople in Tigray are often employe on a contractual basis by the church or local community. This has led to the emergence of master craftspeople who have worked on several churches. In some cases, the patronage of a single wealthy individual has led to the creation of a new church.

In addition to a religious motive, the Dagmawi Lalibela complex has a strong political and social agenda. Gebremeskel Tesema, the principal craftsman, describes the project as a reaction to views that question the authenticity of the medieval churches at Lalibela and suggest foreigners were responsible for their creation. By undertaking the immense task of carving 10 churches, almost single-handedly, he hopes to demonstrate that Ethiopians are capable of carving such structures. Dagmawi Lalibela serves to restore a sense of pride in Ethiopian tradition, promoting the importance of local heritage – something that is being lost to Western influence. Since the fall of communism in 1991, Ethiopia has increasingly looked to the West, which, with rapid urbanisation and globalisation, has contributed to a loss of local culture.

The present craft shows how, in the absence of written or oral record, architecture itself has the ability to embody knowledge. Old rock-hewn churches serve as the inspiration for new ones; this indirect, intergenerational dialogue presents an unusual form of embodied knowledge and transfer of skill. The resurgent present-day craftspeople are self-taught, necessitating the relearning and reappropriation of the craft; the use of traditional hand-held tools suggests a method likely employed in medieval and ancient rock churches.

Without such precedent or religious fervour, it is inconceivable that clergymen and craftspeople of 21st-century Ethiopia might choose to hand-chisel churches from solid rock. Since November 2019, the Tigray War has seen the region where most rock-hewn churches are found cut off from communication and supplies and some churches have been partly destroyed. These have once again provided a place of refuge and hope for civilians and militia alike