The discovery of famed “Lucy” Fossils

While hunting for fossils in Ethiopia’s Afar Triangle on November 24, 1974, paleoanthropologist Donald Johanson and graduate student Tom Gray stumbled upon the partial remains of a previously unknown species of ape-like hominid. Nicknamed “Lucy,” the mysterious skeleton was eventually classified as a 3.2 million-year-old “Australopithecus afarensis”—one of humankind’s earliest ancestors. The headline-grabbing find filled in crucial gaps in the human family tree, but it also shook up ideas about early human evolution and upright walking. Forty years later, learn the story behind the fossil that permanently changed scientists’ understanding of human origins.

Dr. Donald Johanson woke up on the morning of November 24, 1974, feeling lucky. The paleoanthropologist—then a professor at Case Western Reserve University in Cleveland—was several weeks into his third expedition to Hadar, Ethiopia, a site that had proven to be a treasure trove of early fossil remains. His international field team had already found leg bones and several jaws that were among the oldest examples of hominids—the family of bipedal primates that includes humans and their ancestors—and Johanson was convinced that an even bigger discovery was in the offing. When an American graduate student named Tom Gray announced he was leaving to scout out a nearby fossil site, Johanson had a hunch he should tag along. “I felt a strong subconscious urge to go with Tom,” he later wrote. “I felt it was one of those days…when something terrific might happen.” Ignoring the already scorching heat and the mountain of paperwork on his worktable, Johanson hopped in a Land Rover with Gray and made the four-mile journey to a gully on an ancient, dried out lakebed. Before he left, he made a brief note in his journal: “To Locality 162 with Gray in AM. Feel good.”

Johanson and Gray’s search turned up very little at first. The pair found a few animal bones and teeth, but nothing extraordinary. After a few hours of scouring the sunbaked ground, they decided to take a detour through a nearby gully for one last look. There, Johanson spotted what he instantly recognized as a piece of hominid elbow bone protruding from the dirt. When he and Gray bent down to examine it, they saw that it rested next to other pieces of thighbone, vertebrae and ribs. All appeared to belong to the same skeleton. “We were just astounded,” Johanson later told the New York Times. “You just don’t expect to find this much of a single individual.” Johanson and Gray raced to tell their colleagues. As they drove up to their camp, Gray laid on the horn and yelled out, “We’ve got it! Oh, Jesus, we’ve got it. We’ve got the whole thing!” 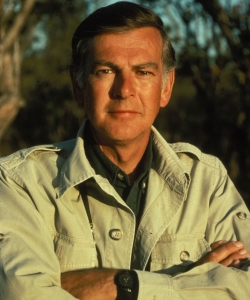 That night, the jubilant field team celebrated the discovery over dinner and several cans of beer. In the background, a stereo blared with The Beatles’ album “Sgt. Pepper’s Lonely Hearts Club Band” on repeat. When the song “Lucy in the Sky with Diamonds” came on, someone suggested calling the new skeleton “Lucy.” The name stuck.

Along with the expedition’s co-director, the French geologist Maurice Taieb, Johanson and the rest of the field team spent the next several days scouring the Lucy discovery site. They found dozens of intact pieces of leg, pelvis, hand and arm bones as well as a lower jawbone, teeth and part of the skull. All told, the pieces amounted to about 40 percent of what appeared to be at least a three million-year-old hominid skeleton. A more ancient or complete specimen had never been discovered.

When pieced together, the small bits of brown bone painted a stunning picture of what Lucy would have looked like. She was surprisingly small—slightly less than 4 feet tall—and would have tipped the scales at roughly 60 pounds. Her larger pelvic opening suggested she was female, and wear on her wisdom teeth hinted she was probably around 20 years old when she died (more recent estimates suggest she may have been closer to 12 or 13). She would have appeared more ape-like than human, with long arms and a protruding belly. Unlike knuckle-dragging apes, however, the structure of her bones showed that she walked upright on two legs.

In this regard, Lucy was like nothing the researchers had ever seen. Anthropologists had often speculated that erect posture had developed as hominids evolved larger brains, but Lucy’s brain was only the size of a grapefruit—roughly as big as a chimpanzee’s. This suggested that upright walking had developed long before larger brains. She “had a tiny brain,” Johanson later wrote in his 1981 book on Lucy, “and yet walked erect…here was an ape-brained little creature with a pelvis and leg bones almost identical in function with those of modern humans.”

Equally remarkable was how old she was. While the scientists couldn’t date the fossils directly, the age of the geological strata in the Hadar Basin indicated the Lucy skeleton was likely more than three million years old—far more ancient than other hominids. Once Lucy’s skeleton had been transported to the United States for further study, geologists used potassium-argon dating and other methods to fix the age of the basalt layer surrounding the discovery site at around 3.6 million years old. That number was later amended to 3.2 million years old using a more sophisticated radiometric dating process known as argon-argon dating.

Johanson’s first impulse was to label Lucy as part of the genus Australopithecus, a family of ape-like hominids that thrived between 2 and 4 million years ago. But when he took a closer look, he saw that many of her features were significantly more primitive than other Australopithecine specimens. Starting in 1976, Johanson and U.C. Berkeley anthropologist Tim White studied Lucy’s skeleton even further in an effort to place her in humankind’s family tree. The duo compared Lucy to a so-called “First Family” of some 13 other skeletal remains found at Hadar as well as to a collection of hominid footprints excavated by famed anthropologist Mary Leakey in Laetoli, Tanzania. Finally, in 1978, they released a groundbreaking paper classifying Lucy, the other Hadar fossils and the Laetoli footprints as all belonging to a brand new species of early hominid human ancestors. They called them “Australopithecus afarensis,” after the Afar Triangle in which Lucy was found.

Johanson and White’s bombshell promptly encountered backlash from the anthropological community. Many held that Australopithecus afarensis was not a discrete species, and still others—most notably the Kenyan paleoanthropologist Richard Leakey—balked at the assertion that fossils like Lucy were the direct ancestors of modern humans. The case for Australopithecus afarensis was strengthened in the early 1990s, however, when further research at Hadar yielded a wealth of other Lucy-like fossils including near-complete skulls of both male and female specimens. All told, Johanson and other researchers eventually collected fossils belonging to several hundred different Australopithecus afarensis individuals. These finds have helped bring Lucy and her kind into even sharper relief. Studies of afarensis shoulder bones have shown that Lucy most likely spent as much time climbing trees as she did walking upright on the ground, and other evidence has shown that she may have been a social animal that lived in small family units.

In the years since Lucy was lifted from her 3.2-million-year-old grave, anthropologists have gone on to find older and even more complete fossil remains of early human ancestors. In 2000, scientists in Ethiopia unearthed the remains of a 3.3 million year old Australopithecus afarensis baby dubbed “Selam.” The child was 100,000 years Lucy’s senior, but it’s now often known as “Lucy’s Baby.” Perhaps even more spectacular was “Ardi,” a 4.4 million year old Ardipithecus ramidus that displaced Lucy as the earliest known skeleton of a human ancestor. News of “Ardi” first came to light in 1994, but since then, scientists have found evidence of even older hominids dating back as far as 7 million years ago.

Despite these more recent breakthroughs, Lucy still stands as perhaps the most famous hominid fossil discovery ever made. Casts of her skeleton sit in museums around the world, and hundreds of thousands of people flocked to a traveling exhibition of the original Lucy fossils in the 2000s. In a 2009 interview with Time, Johanson speculated that Lucy’s enduring celebrity stemmed from the way she helped fill in the blanks in our understanding of early humans. “She showed us conclusively that upright walking and bipedalism preceded all of the other changes we’d normally consider being human…” he said. “She gave us a glimpse of what older ancestors would look like.”