The Israeli Embassy in Ethiopia was on high alert over the last two months due to fears of a potential Iranian attack, according to a Thursday television report.

Their main target was to inflict huge loss of lives and damages to properties as well as damaging the good image of  Addis Ababa, which is the seat of African and international diplomatic missions, it said.

According to the statement, heavy weapons, explosive materials and various documents were also seized during the operation.

The statement further said NISS, in collaboration with his Sudanese counterpart, managed to dismantle networks of terrorist groups and foiled a planned attack on the UAE embassy in the Sudanese capital Khartoum.

The suspects were arrested in a joint operation carried out by the Security Services, Federal Police Commission, and other security organs, it indicated.

Israeli officials told Kan that Iran was behind the attempt, in retaliation for the killing of its top general Qassem Soleimani by the US last year and of top nuclear scientist Mohsen Fakhrizadeh in November. Iran blamed Israel for Fakhrizadeh’s killing and swore revenge. 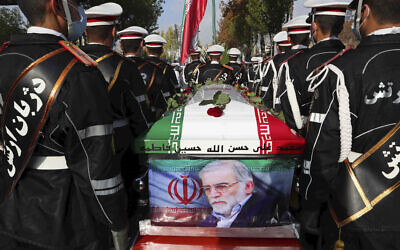 Military personnel stand near the flag-draped coffin of Mohsen Fakhrizadeh, during a funeral ceremony in Tehran, Iran, November 30, 2020. (Iranian Defense Ministry via AP)

A Monday report on Kan said Iranian agents who scouted out the Israeli, American, and Emirati embassies in an unnamed East African country in preparation for a potential attack had been arrested. It was not immediately clear whether those were the same 16 suspects in Ethiopia.

Traversing across multiple continents, some of the suspects planning the attacks in East Africa, were European, including the alleged mastermind, Ahmed Ismail, a Swede, who was arrested in Sweden after local authorities exchanged intelligence with Ethiopian counterparts, Kan said.

Last Friday saw a blast rock the Israeli embassy in New Delhi, India. The explosion damaged cars but did not cause injuries.

Israeli authorities are treating the explosion as a suspected terror attack aimed at the embassy, and have stepped up security precautions at missions around the world. 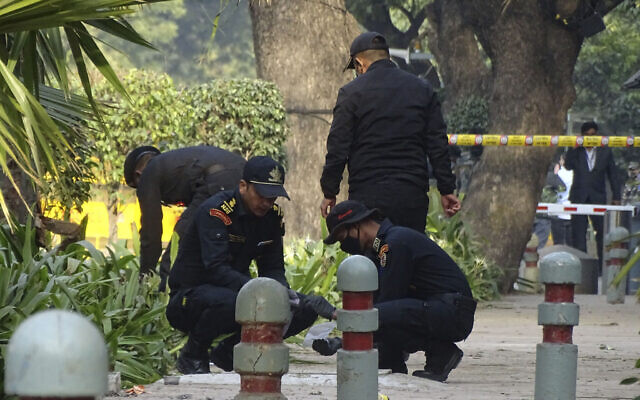 A handwritten note found at the scene of the bombing claimed responsibility for a previously unknown group identifying itself as “India Hezbollah.” It cited the killings of Soleimani and Fakhrizadeh, according to Indian media reports.

A police statement described the Friday explosion as having been caused by a “very low-intensity, improvised device,” that blew out the windows on three nearby cars, and said a preliminary investigation “suggests a mischievous attempt to create a sensation.”

In 2012, the wife of Israel’s defense attaché to India was moderately injured after a motorcyclist attached a bomb to her car near Israel’s New Delhi embassy. Iran was suspected in the attack. It was part of a series of attempted attacks against Israeli targets around the world attributed to Iran.

There was speculation that those incidents were in response to Israel’s alleged assassinations of multiple Iranian nuclear scientists as Jerusalem fought to curtail Iran’s nuclear program.

The Time of Israel