How Change Happened in Ethiopia: A Review of Abiy Ahmed’s Leadership

The wire, by Yohannes Gedamu
 
Ehiopia has gone through a series of changes that’s put the country on firm democratic footing.
 
Last year was an historical one for Ethiopian politics. Most Ethiopians now feel hopeful about the prospect of peace and democratic progress. This is despite the fact that the ruling Ethiopian People’s Revolutionary Democratic Front – which has a long history of authoritarianism – is still in power. Nonetheless, a new progressive leadership with Prime Minister Abiy Ahmed at the helm, and a series of reforms he’s introduced, could mean that the ruling party of old is gone for good.

The reformed party, chaired by Abiy and his deputy Demeke Mekonnen, is enjoying wider acceptance and renewed political legitimacy.

At the same time, Ethiopians are very aware that the recent political change has been achieved on the back of relentless popular protests. This suggests that there are still many issues that remain unresolved.

And few Ethiopians expect the ruling coalition to change from within given that it had fashioned itself as the lone voice in a closed political space. Moreover, the fact that the coalition is just made up of four political parties representing only four of the nine regions imply that most groups in the political periphery remain marginalised.

In reviewing events one requires a real understanding of the driving factors, as well as the remaining challenges.

Ethiopia’s ethnic federalism has historically pitted one ethnic group against the other. Over time, political manoeuvrings empowered the elites who were member of the four parties that formed the ruling coalition.

Together, the leaders of these groups have navigated Ethiopia’s political terrain for over 27 years. They ensured that opposition leaders were jailed, or were otherwise unable to participate in the narrow political space. The only hope of challenging the political status quo lay with the electorate.

Ultimately, a massive wave of protests across the two most populous regions of the country, Amhara and Oromia, ensured that the political days of the Tigray-dominated ruling coalition were numbered. Attention quickly shifted to the idea of a new political leadership. But which force could replace the authoritarian Ethiopian People’s Revolutionary Democratic Front?

In the uncertain times that followed, Ethiopians came to learn that along with the civic unrest, there was also intra-coalition infighting that had been hidden from the public eye for years. This occurred between the two political parties that represented the Amhara and Tigray groups.

This realisation gave the popular protests fresh impetus to push for change.

The first major crack within the Ethiopian People’s Revolutionary Democratic Front coalition was a series of disagreements between the Amhara Democratic Party and the Tigray People’s Liberation Front since 2014. The top leadership from the two parties differed on the general direction the country was taking.

In addition, the Amhara wing questioned the dominance of the Tigrayans within the ruling coalition. These national party wrangles trickled down to the Amhara and Tigray administrative regions and as rivalries grew, the Amhara leaders, led by Deputy Prime Minister Mekonnen, made it clear that the Tigray front’s interference in Amhara regional state matters would not be tolerated. Such inter-coalition infighting’s were taking place since 2014. 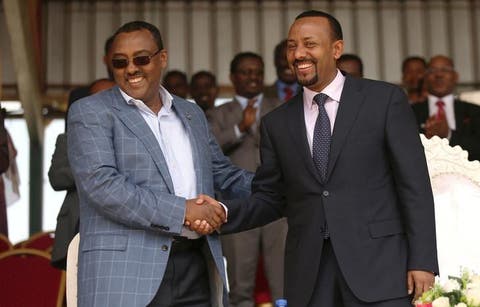 Ethiopia’s prime minister Abiy Ahmed is greeted by deputy prime minister Demeke Mekonnen as he arrives for a rally during his visit to Ambo in the Oromiya region, April 11, 2018. Credit: Reuters/Tiksa Negeri/File Photo

At this time, the Oromo Democratic Party was also embarking on radical internal reforms. Members deemed to be serving the interests of the Tigrayan party dominating the coalition were ousted. The Oromia Region president, Lemma Megersa, and his then deputy Abiy, quickly established a close partnership with reform leaders within the Amhara Democratic Party, a group that was led by Mekonnen . Mekonnen has been Ethiopia’s deputy premier since 2012.

Desalegn’s abrupt resignation was welcome news and focus quickly shifted to his replacement. Because Abiy was a member of Parliament and therefore eligible to become head of government, his party members elected him to the post of ODP party chair. From there he was voted in as Ethiopia’s third prime minister in the ruling coalition’s era, and the first Oromo ever to hold the position.

Mekonnen, who had supported Abiy’s rise to power, became his deputy. Since then the two have had a series of reform successes.

There have also been trying times. Ethnic conflicts, displacement of people on tribal grounds, and a resurgence of the old political elite who have attempted to restore the status-quo, remain issues that Ahmed and co must tackle with urgency.

Amid these challenges, the country is preparing for national elections in 2020. In my view, it would be prudent to either postpone the polls until the new government gets a firm grip on national cohesion and security or work at pace to ramp-up security measures. Its reforms agenda is still vulnerable to destabilisation.

Ahmed also needs to contend with the recently revived Oromo Liberation Front, a rebel group that is refusing to disarm. The fact that the administration has opted to take military action against this group is an unusual development in the current climate, and an indication that Ahmed’s patience for dissent could be waning. Moreover, the political violence in the restive Ethiopian Somali region also remains active. Amid the volatility, Abiy’s administration needs to devise working strategies that could calm the situation down. This is something to watch.

Regardless, Ethiopia’s historic journey towards fully fledged reform seems intact, and popular support for the steps being taken by the administration remains high.

The great power struggle between Washington and Beijing takes an unexpected turn in Ethiopia.