Macedonian-Australian photographer Biljana Jurukovski has been fascinated by different cultures since childhood. For the past five years, she has focused her craft on taking moving portraits of different cultures around the world. In particular, her Tribal Muse series hones in on the beauty of the Surma tribe—and more specifically the Suri.

Living on the border of Ethiopia and South Sudan, the Suri is one of three ethnicities—together with the Me’en and Mursi– that the Ethiopian government classifies as the Surma Tribe. Living in villages of anywhere from 40 to 2,500, the Suri are agropastoralists who live in remote locations that keep them largely cut off from the rest of the world. Honing specifically in on Suri women, Jurukovski’s portraits help show different cultural standards of beauty.

Riskingsafety to travel to areas where inter-tribal fighting is still common, Jurukovski has visited the Suri many times. By setting her subjects against simple, black backdrops, she removes any visual distractions from the people she photographs and manages to pay respectful homage to the women and their culture. The Surma are known for their beautification rituals that include body makeup and scarification, and Jurukovski captures the rich details of their traditions without diminishing the Surma to a stereotype. As she continuously travels to Ethiopia to visit more tribes, she also returns to areas in order to show her models their portraits, bringing the project full circle.

We had a chance to speak with Jurukovski just prior to a new trip to Ethiopia. Read on for our exclusive interview as she opens up about her work. 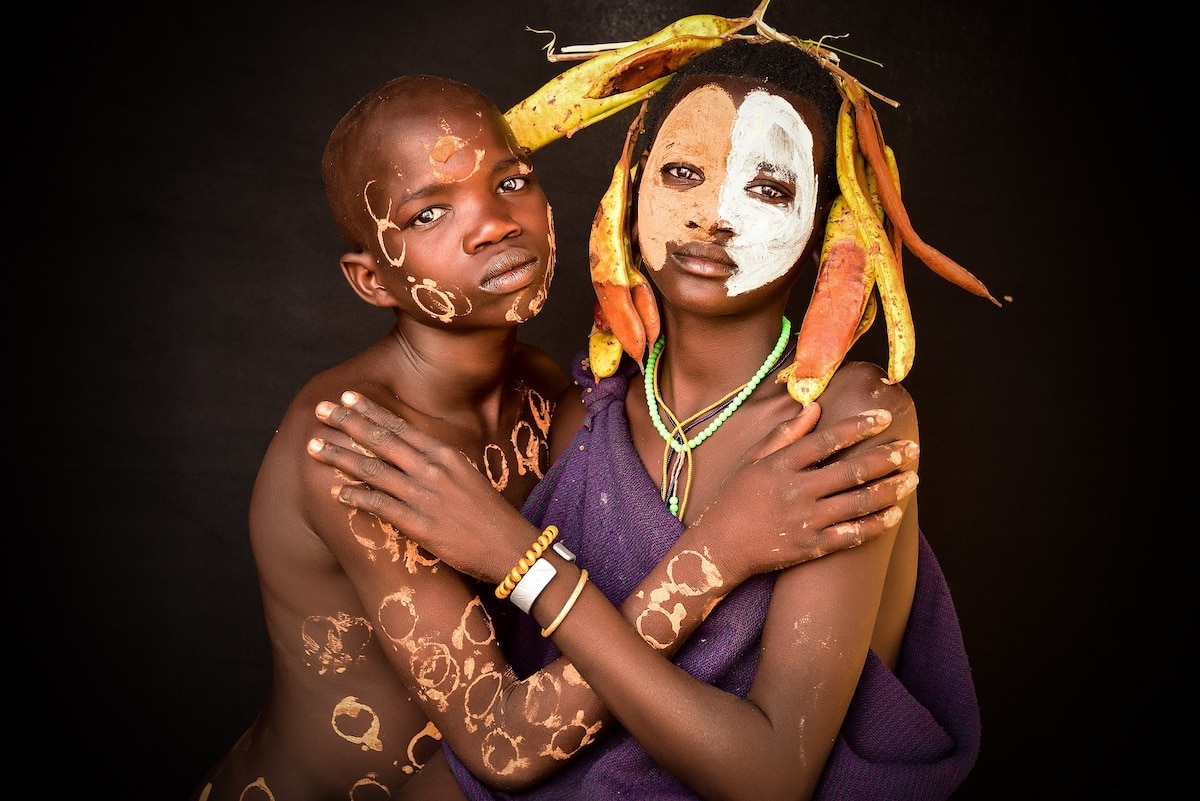 “Close to My Heart”

What drew you to the type of cultural photography you work on?

I was always a dreamer. From a very young age, I was dreaming about far away places and getting to know different cultures. I was always fascinated by traditions and the traditional clothes of different cultures and loved learning about them. On my first trip to outside of the normal tourist destinations, in Punjab, I was so blown away with the colors, the street life, and their culture so I started thinking that I want to capture all of that and to share it with others. At that time, it never struck me that later I would be doing what I’m doing today—traveling to some of the most remote areas in the search to photograph different cultures. Loving to do something is one thing but it is not always easy to start doing it. You see, being a wife, mother, and working full-time, you always think of everybody else first before you even starting thinking about what you want.

Then 2014 was the crucial year when I decided to step towards the complete unknown world. I remember I came across this amazing book Before They Pass Away by photographer Jimmy Nelson and I was completely blown away and mesmerized by his photographs of tribal people. I fell in love with his work and I was amazed by the diversity of different cultures presented who were trying to keep their culture. I remember looking at his photographs and I kept asking myself so many question—who are these people, do they still exist, how I can get there? There were thousands of questions going through my head up until today as I keep finding the answers by visiting some of those tribes, spending time with them, and photographing them. 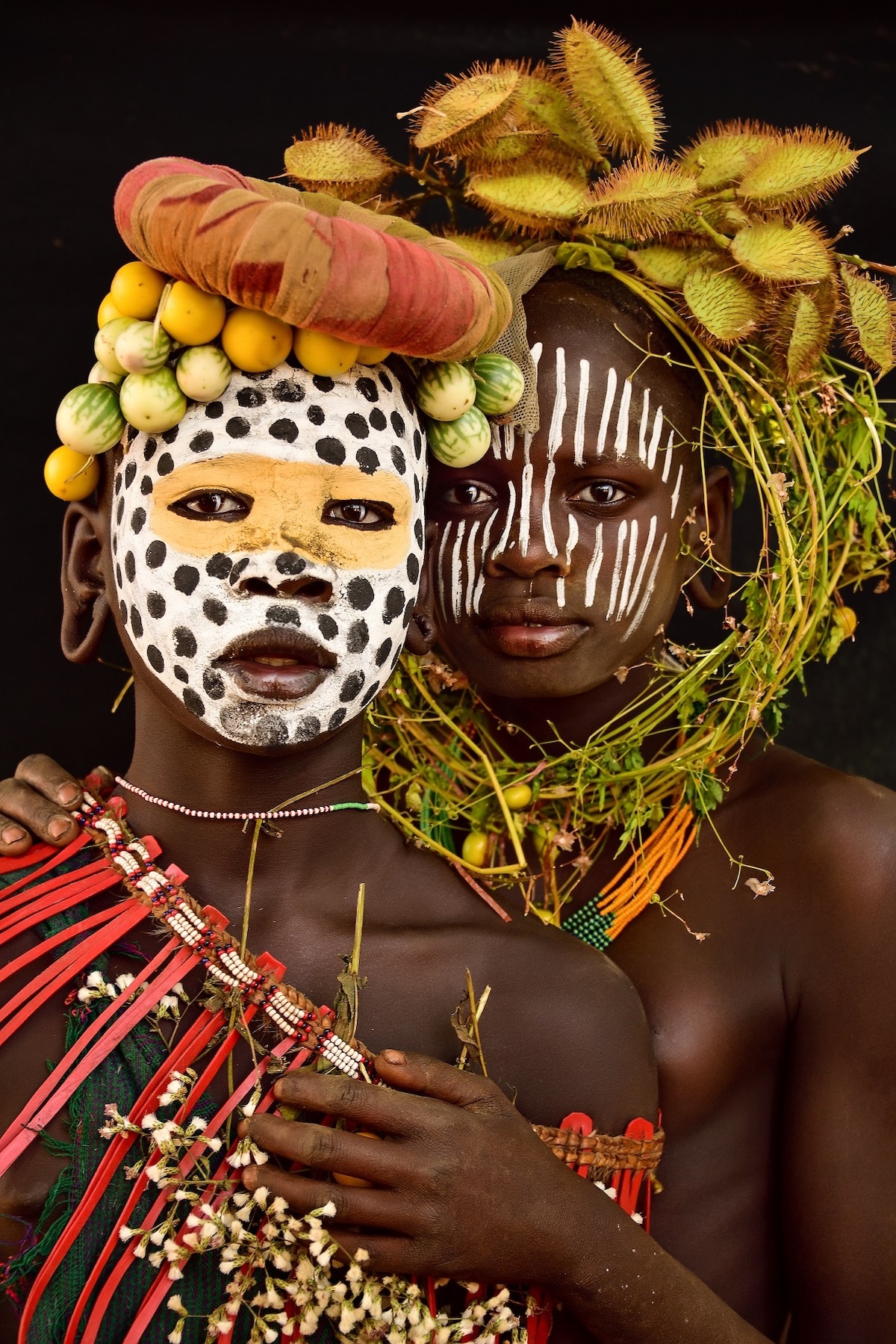 Where do you think your love of different cultures comes from?

I often ask myself that question and answering it is never easy, as it is so multidimensional and influenced by different experiences in life. We must start with the roots and with me the knowledge of my origins, culture, and traditions are the roots and beginning of that love. I was born and raised in Macedonia, a country with a very strong cultural and traditional upbringing and that has been so deeply embedded in my mind from a very young age.

When I was 21, I immigrated to Australia, which is a very multicultural country, and I guess there I started branching out and getting familiar with many different cultures. Then I started thinking about what I can leave behind me once I’m gone, something beyond the materialistic things for the generations that are to come. I want to leave a footprint and for them to be able to see what maybe they will not be able to see in the future; the beauty of the tribal world and diversity. Those are shrinking communities and the chances for them not to exist in a few decades from now are very high. 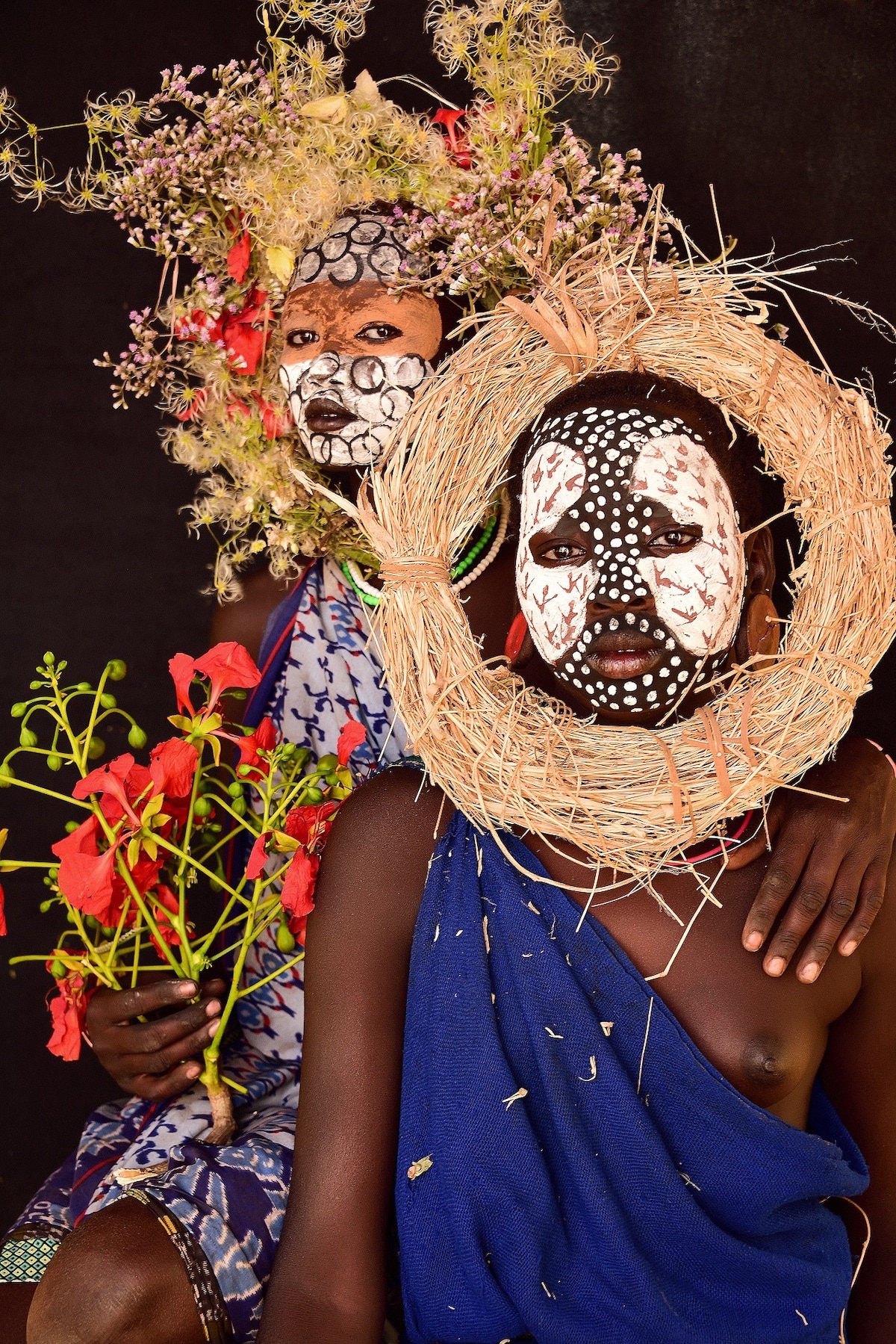 What made you decide to start with the Suri tribe?

The Suri tribe is not the beginning as I have photographed previously other tribes in Ethiopia, Angola, as well as the Eagle Hunters in Mongolia. However, the Suri tribe is one of the most artistic and colorful, with never-ending creations when it comes to decorating themselves. In my eyes, they are the avant-garde of the tribal world and their imagination and creativity is one that I cannot stop admiring.

The tribe resides on the border between Ethiopia and South Sudan in an area that remains isolated, untouched by tourists due to the location, lack of amenities, and due to tribal conflicts. With no Western influences, the Suri tribe managed to create their own “Code of Beauty and Fashion,” using only a few elements from Mother Nature. They use colors from crushed rocks to paint their bodies and faces, while flowers, fruit, and branches are used for their hair decorations. Body art is used to connect the people of the Surma/Suri tribe to their surrounding natural environment; it is believed in the tribe that if you are connected to your land you will live a long and prosperous life. 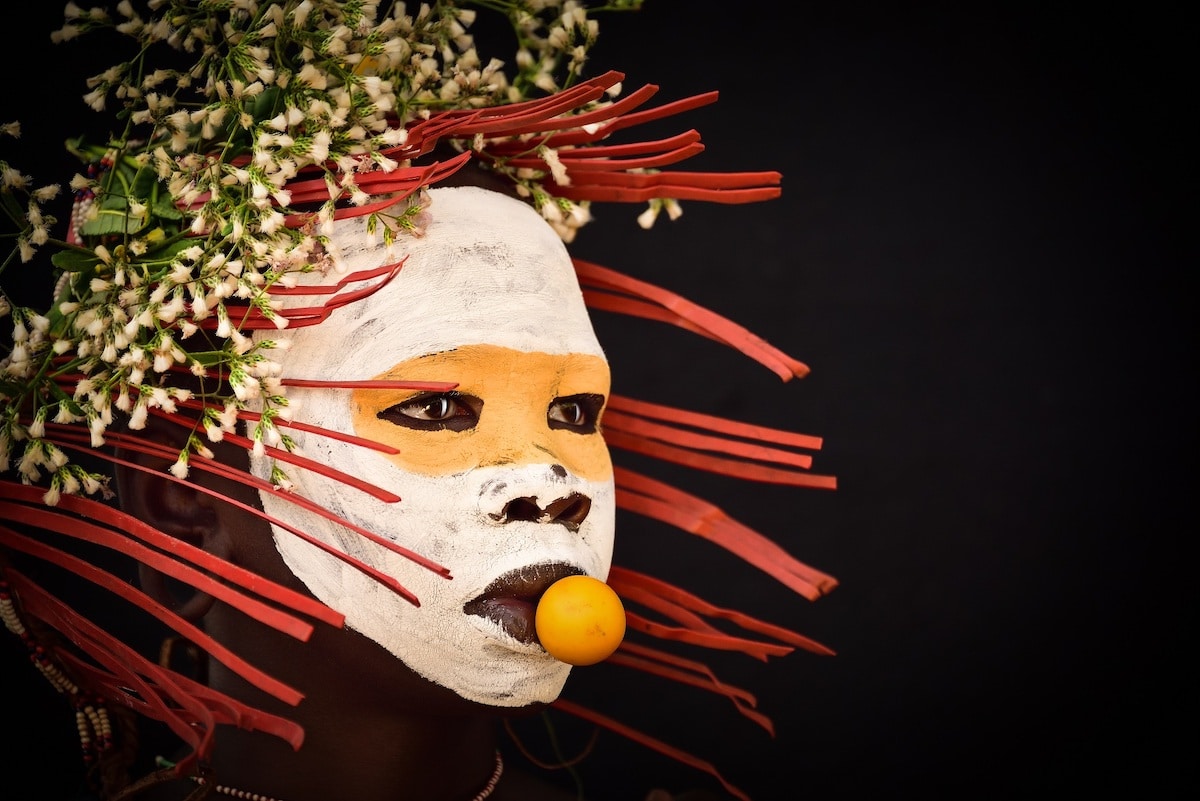 “Call of the Wild”

Can you tell us about the motivations behind the artistic choice to have them posed against a black background?

My Tribal Muse series is a collection of intimate portraits of the beautiful Suri/Surma tribal people. Some of them were intentionally photographed against a black backdrop, so the focus can be on their beauty and artistic skills. The whole idea was that the focus of the viewer would be on the portrait itself with no other distractions whatsoever. The sense of individuality and creativity is very strong amongst the people and as a photographer, I felt that I need to share the story—the story of creativity and beauty, a story that goes beyond the world of poverty and beyond the fear of the unknown places. 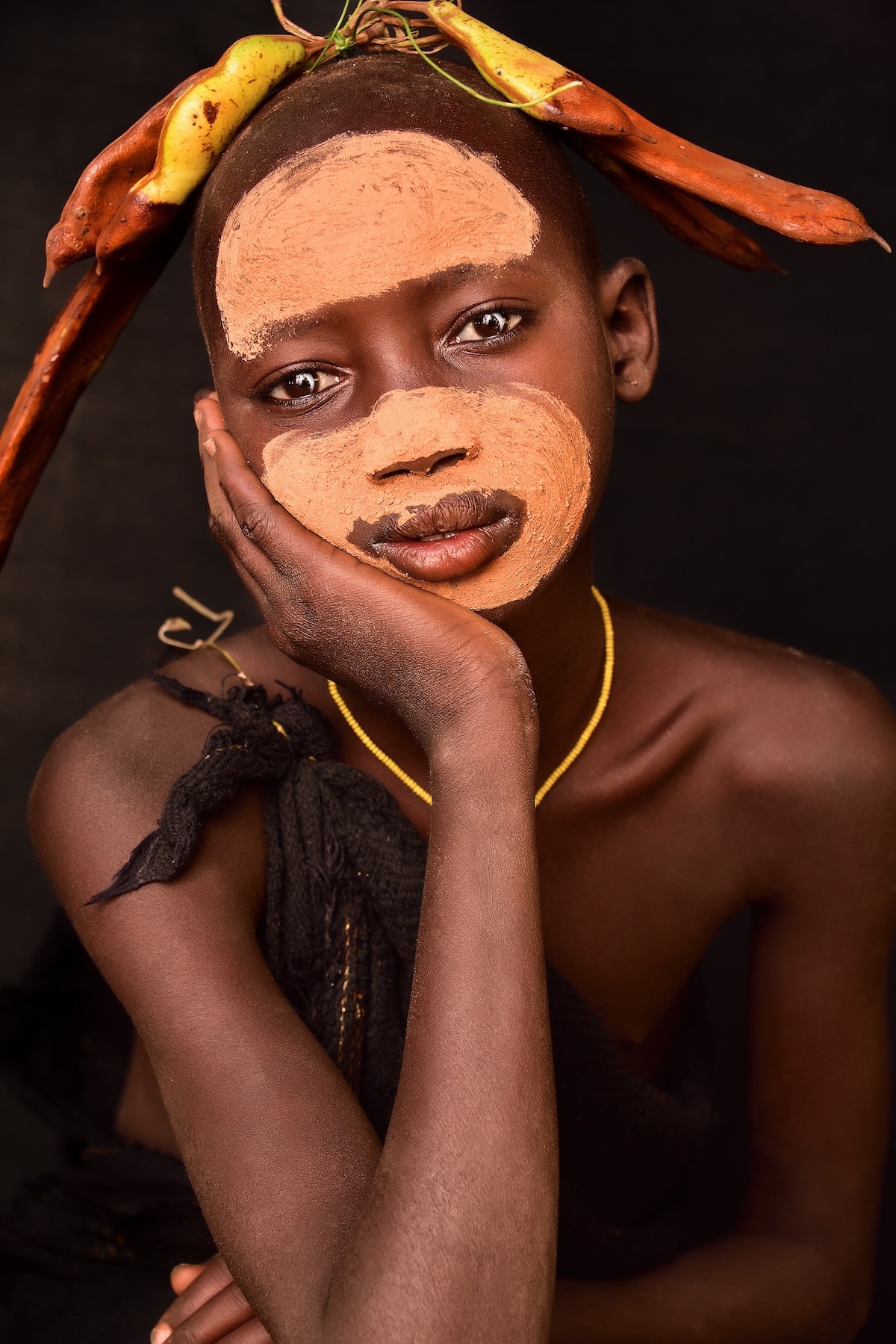 WHat was the most challenging part of the project thus far?

I find the most challenging part is being a woman, particularly when you deal in the man’s world and especially when you need to travel to destinations that are so remote and where inter-tribal wars are still present. 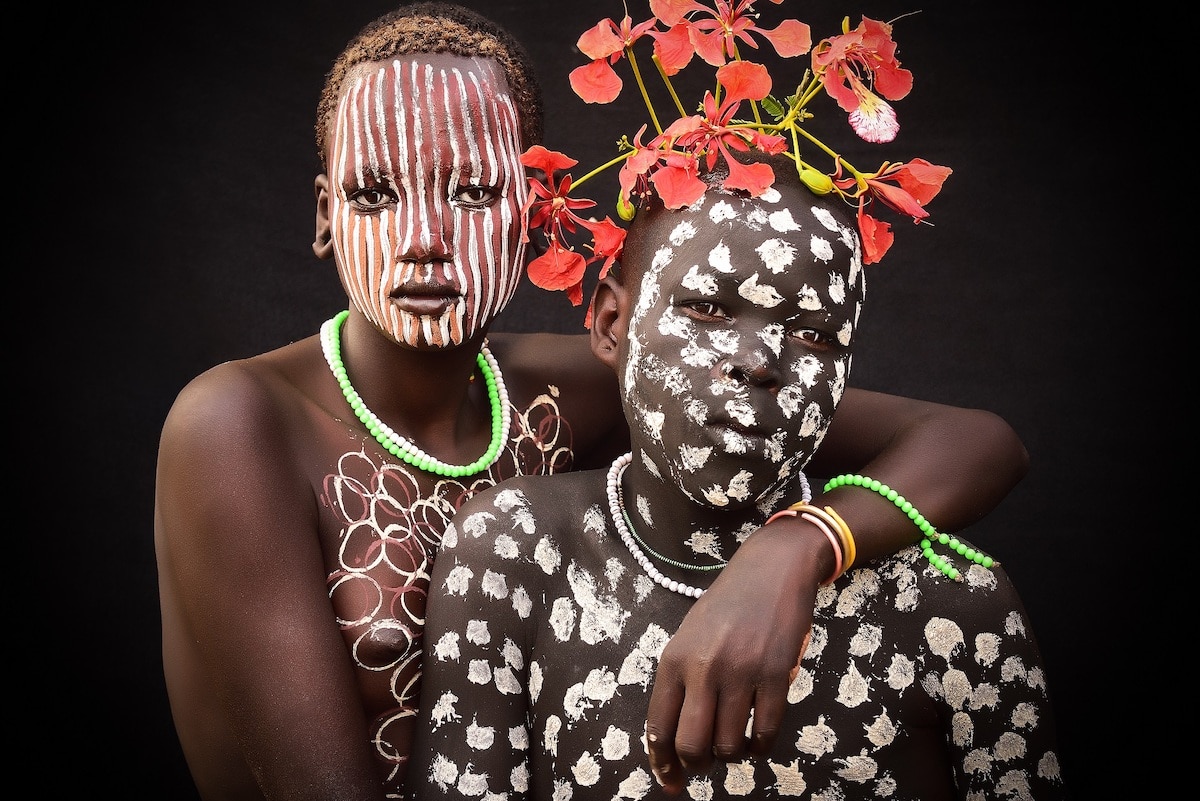 “In the Name of Love”

How do you organize yourself for travel?

Preparations take some time, as you need to be very well organized and to be able to cover all your bases. The most important thing when you travel to such remote areas where a lot of the tribes are armed is to have the right person/guide.

I’m very lucky, as I will be going for the third time next week, that I have a guide that I trust to arrange a police escort for me until I arrive at the tribal areas and then to have armed guards with me for safety reason. It is never an easy trip; however, I love it. Carrying cameras and equipment is extremely physically demanding and you always need to be prepared and to carry extra equipment, food, medications. You operate from the point of  “in case something happens, I need to have that.” We carry absolutely everything with us; from water to cooking equipment—you name it we have it. 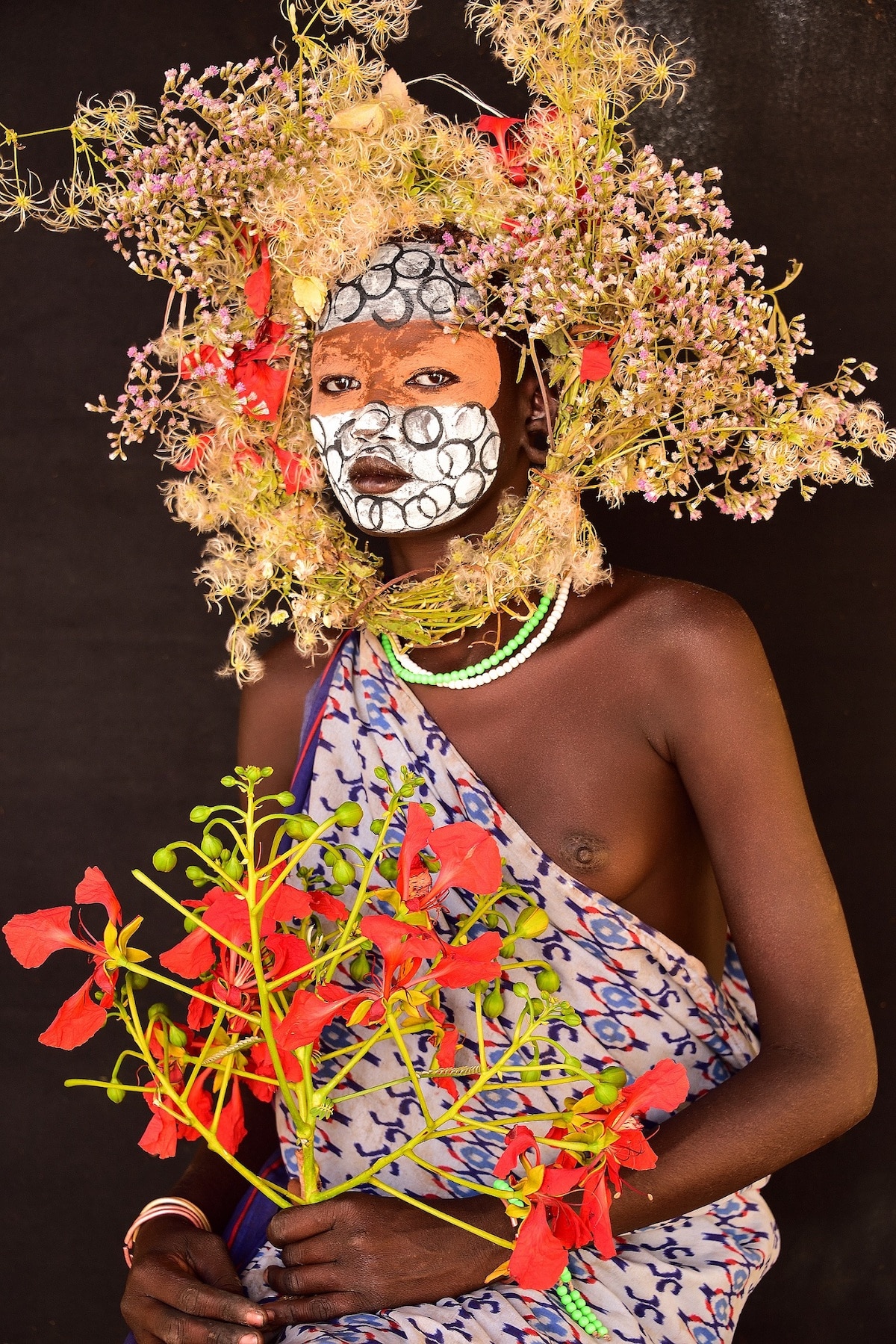 I know you are headed back to Ethiopia. Can you share a bit of what you have planned?

I will be going back to the Suri tribe to take back and show them the pictures that I have taken. Also this time I will be going to a few other different tribes as that part of Ethiopia is so rich with different ethnic tribes. I do have an idea in my head what I want to photograph, but I will need to wait and see until I reach the tribal areas. 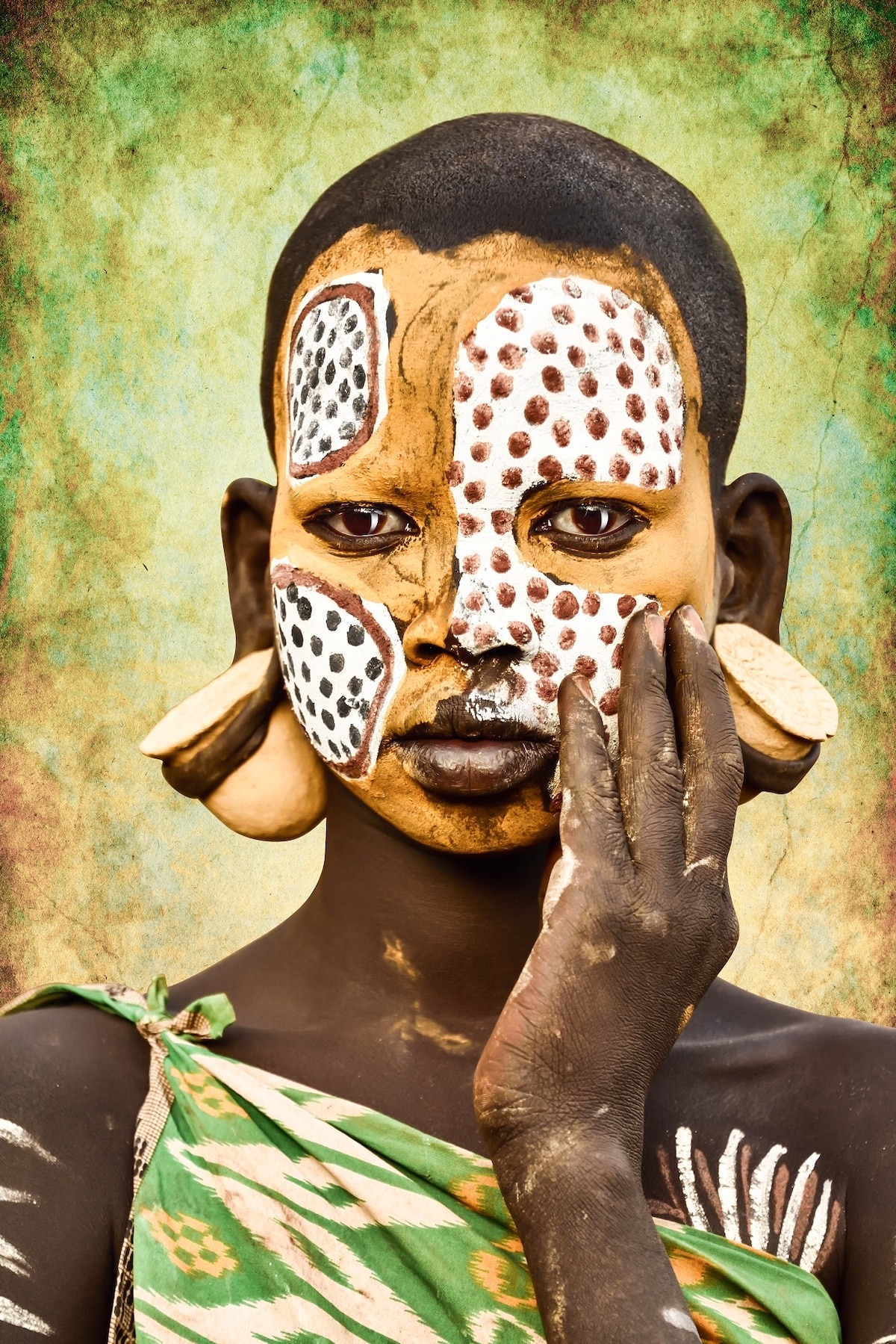 What do you hope people take away from Tribal Muse?

The aim of the Tribal Muse portfolio was to present beauty in a very unique way and to encourage all women to believe that there is nothing more beautiful than being unapologetically yourself. I do want to challenge the traditional way of how we see beauty, especially in women, and to provoke and lead viewers to engage in conversations about the concept of beauty. At the same time, I want to honor the beauty of the Suri tribe, to reveal their strength, their differences, and their pride. 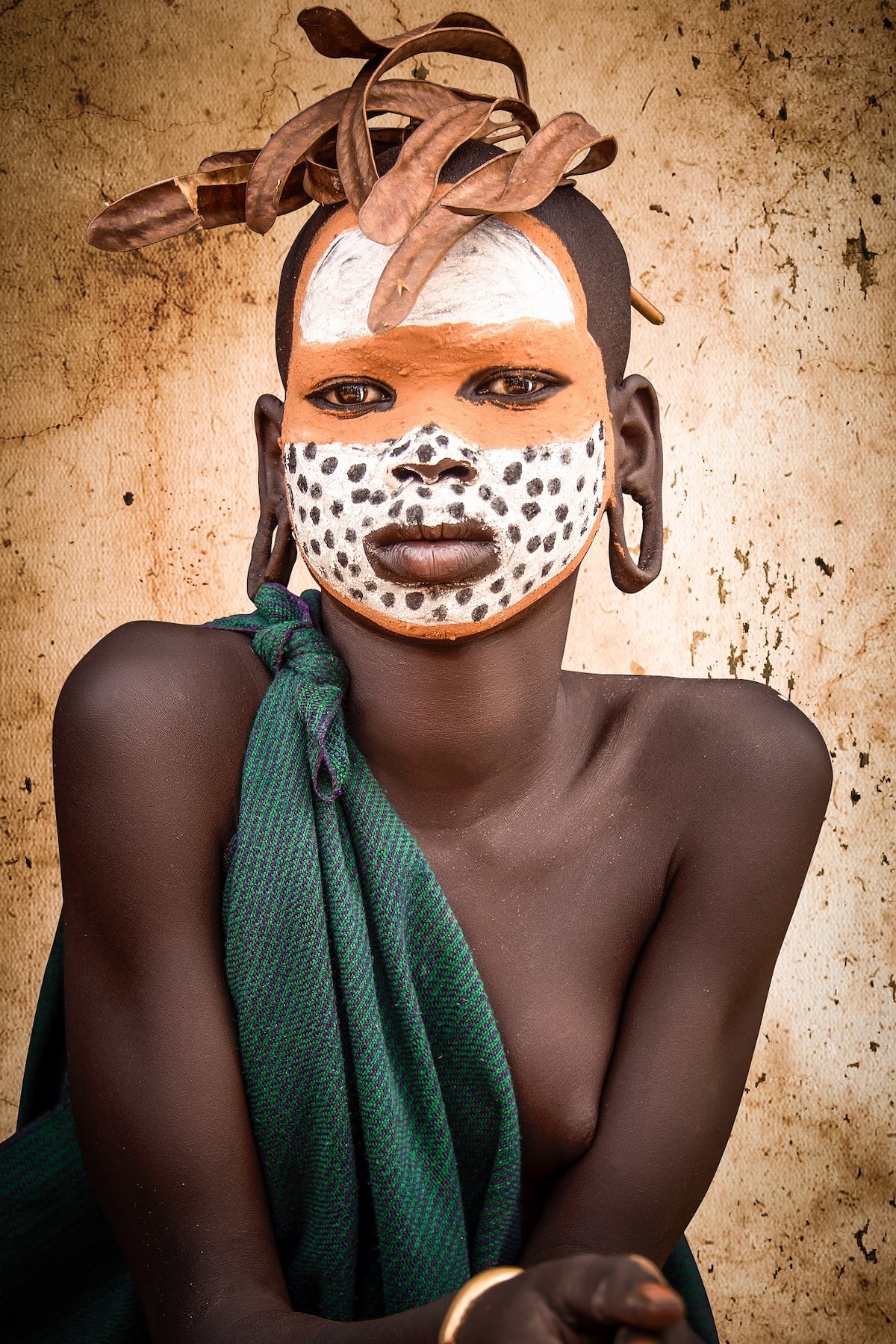 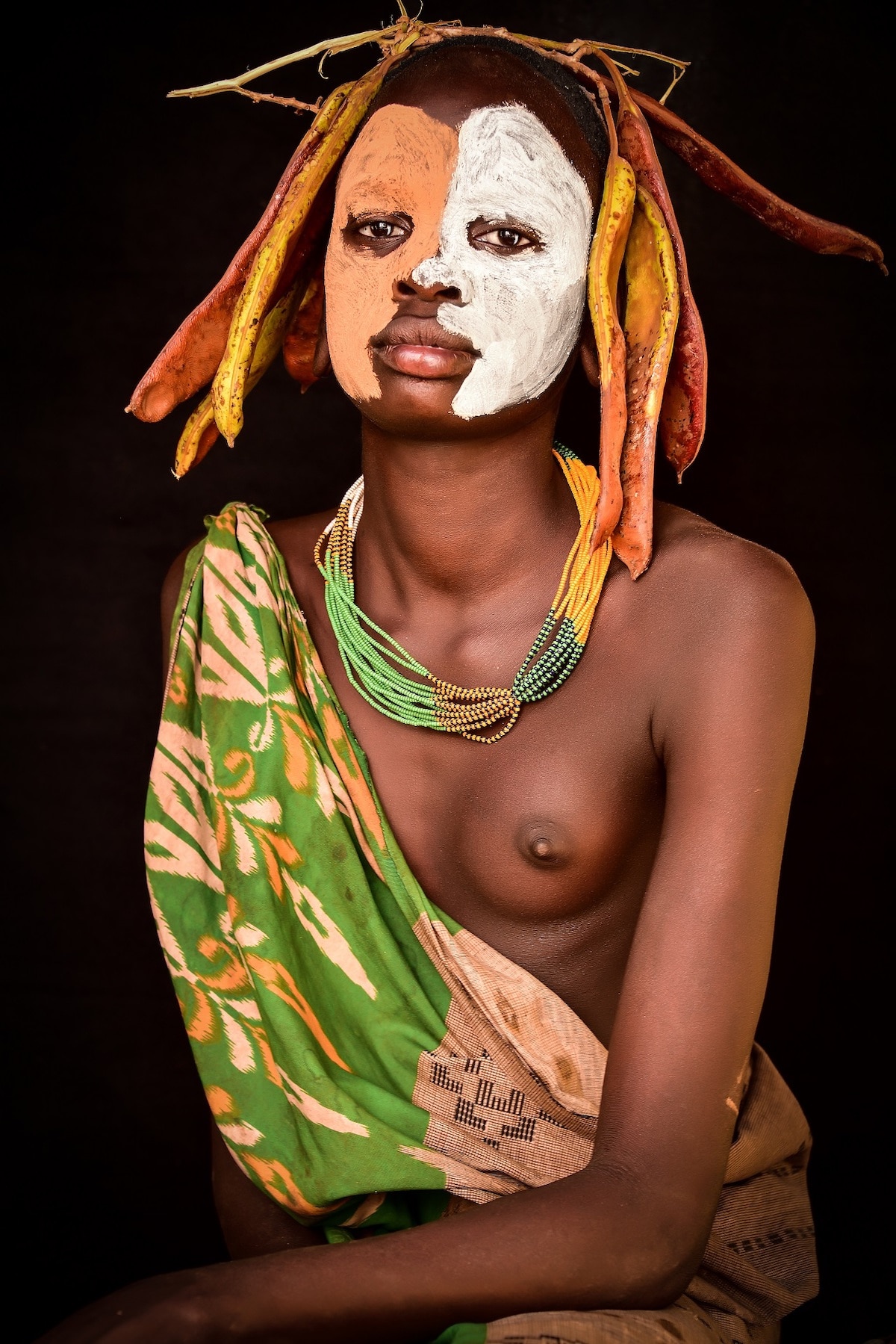 ECA working with African countries to increase investment for infrastructure, energy and agriculture on continent