The sprawling Quai Branly Museum in Paris is stuffed with treasure. It has some 70,000 objects from sub-Saharan Africa in its collection, including magnificent statues from present-day Benin and delicate paintings that once decorated church walls in Ethiopia. But a long-awaited report coming out this week could have a dramatic impact on what visitors see there, with repercussions for other international museums.

The report was commissioned in March by President Emmanuel Macron of France from two academics, who were asked to draw up proposals for the restitution of pieces of African cultural heritage. It is due to be delivered to Mr. Macron on Friday. A copy was made available to The New York Times.

The academics, Bénédicte Savoy of France and Felwine Sarr of Senegal, recommend that objects that were removed and sent to mainland France without the consent of their countries of origin be permanently returned — if the country of origin asks for them. This restitution should be part of a collaborative process of information gathering, research, scientific exchange and training in the next five years, they say.

The report could have far-reaching consequences for the international museum world. It says that 90 to 95 percent of Africa’s cultural heritage is held outside Africa by major museums. France alone has at least 90,000 objects from sub-Saharan Africa in its national collections, of which 70,000 are inside the Quai Branly Museum. The rest are elsewhere in Paris, in port cities like Cherbourg and Le Havre, and in large centers like Lyon and Grenoble.

President Emmanuel Macron of France giving a speech in Ouagadougou, Burkina Faso, last November. “I cannot accept that a large part of the cultural heritage of several African countries should be in France,” he said.CreditLudovic Marin/Agence France-Presse — Getty Images 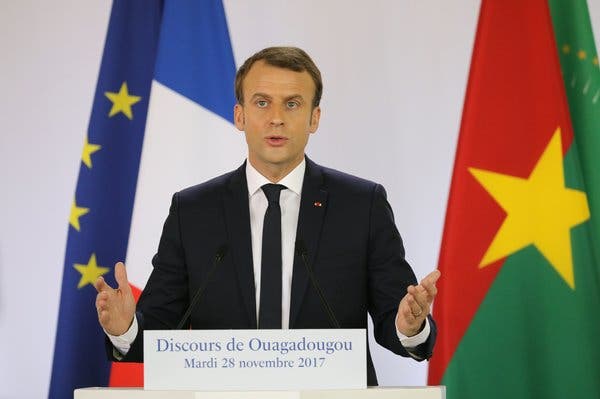 “There is no question, either for us or for our African counterparts, of emptying French or European museums to fill up African ones,” Ms. Savoy, an art historian and professor at the Technical University of Berlin and a professor at the Collège de France, said in an interview this month. “This is obviously not a case of transferring back the 70,000 objects from sub-Saharan Africa that are today in the collections of the Quai Branly Museum and that arrived in France over a period of 150 years.”

To help achieve that rebalancing, the report recommends the restitution of “any objects taken by force or presumed to be acquired through inequitable conditions” by the army, scientific explorers or administrators during the French colonial period in Africa, which lasted from the late 19th century until 1960.

The report is already sending shudders through the French museum world after the newsmagazine Le Point leaked excerpts from it on Monday with the alarming headline: “African artworks: A report recommends giving everything back (or just about)!” The magazine said the report did nothing to dispel fears that entire sections of the Quai Branly Museum would be emptied.

Elsewhere in Europe, museums will be closely watching the fallout from the report, which could increase pressure on them to return objects from their own collections. The British Museum in London has some 700 objects from the Kingdom of Benin, whose territory is now part of Nigeria. Berlin is hoping to fill its new Humboldt Forum museum with several hundred sculptures from the same kingdom and known as the Benin Bronzes. 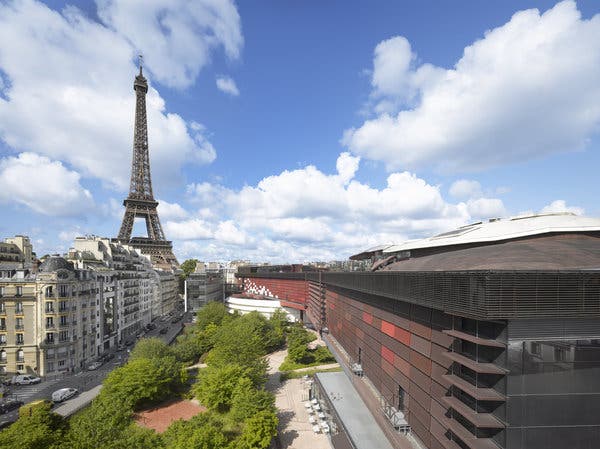 Both institutions are part of the Benin Dialogue Group, a museum consortium that is looking into the return of some Benin treasures to Nigeria on long-term loan. The French report advises against such measures in favor of permanent restitution.

Mr. Macron first raised the issue in November 2017, when he stood before hundreds of students at a university in Ouagadougou, the capital of Burkina Faso, and made a bold promise that had them clapping and cheering.

“I cannot accept that a large part of the cultural heritage of several African countries should be in France,” he said. “Africa’s heritage must be showcased in Paris, but also in Dakar, in Lagos, in Cotonou. This will be one of my priorities. Starting today, and in the next five years, I want to see the conditions put in place so as to allow for the temporary or definitive restitution of African cultural heritage to Africa.”

The question is how far Mr. Macron will go in implementing the recommendations of a nonbinding report, albeit one he ordered himself. Earlier this year, he tore up a set of proposals he commissioned on improving economic conditions in suburban areas. While Mr. Macron has a comfortable majority in the French Parliament, he has an approval rating of 25 percent and faces a nationwide strike against a planned gasoline tax increase.

The Quai Branly museum declined to comment until the report was delivered to Mr. Macron on Friday and read by the museum’s president, Stéphane Martin. 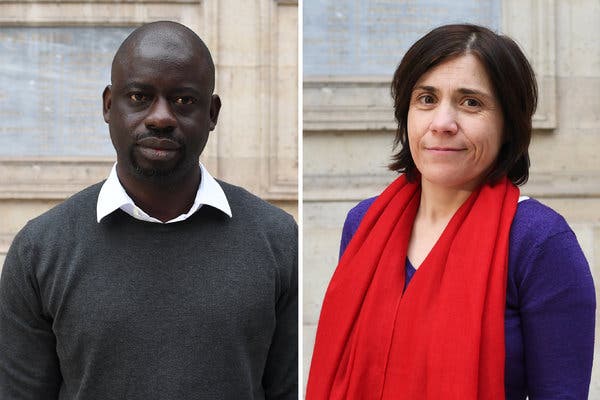 Marie-Emmanuelle Pommerolle, an Africa specialist and lecturer at Panthéon-Sorbonne University in Paris, said Mr. Macron’s campaign for restitution was typical of his approach to domestic and foreign policy.

“Macron is determined to personify a new political generation that has no links to the colonial period,” Ms. Pommerolle said. He wants to make a “break with the generations that came before.”

Ms. Pommerolle said Mr. Macron’s statement on restitution was “in keeping with the acknowledgment of a violent past, of a violent relationship with the African continent, and of practices that, even decades later, cannot be considered legitimate.”

At the same time, Ms. Pommerolle cautioned, the return of objects to Africa must be led by museum professionals and not politicians.

“This is a discussion that has to take place between arts professionals and academics,” she said. “Otherwise, there will be a politicization of restitution.”

A late-19th-century funerary crown from the Kingdom of Dahomey on display at the Quai Branly Museum. The kingdom was in what is now Benin, which has asked for the restitution of its national treasures from the museum.CreditGerard Julien/Agence France-Presse — Getty Images 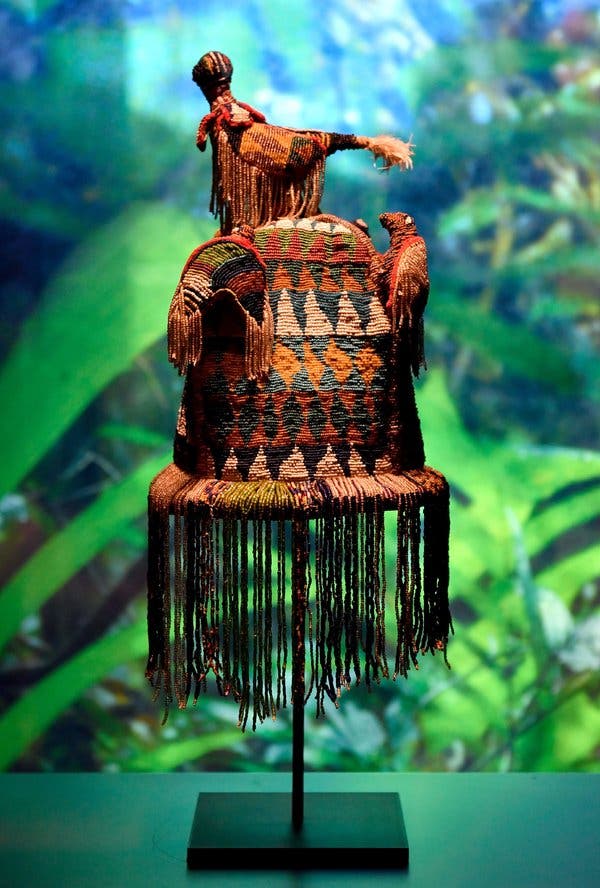 A late-19th-century funerary crown from the Kingdom of Dahomey on display at the Quai Branly Museum. The kingdom was in what is now Benin, which has asked for the restitution of its national treasures from the museum.CreditGerard Julien/Agence France-Presse — Getty Images

Mr. Sarr, an economist at Gaston Berger University in Saint-Louis, Senegal, said in an interview that he and Ms. Savoy traveled to four African countries — Mali, Senegal, Benin and Cameroon — to meet with government officials, museum directors and art specialists before writing the report.

He said that contrary to Mr. Macron’s remarks in Ouagadougou, all restitutions had to be permanent.

“We’re proposing a framework that takes into account the time constraints of the requesting nations,” he said, “so that we’re not imposing a vast quantity of restituted objects on them, and are making sure that they actually want restitution, are prepared for it and are in a position to organize it.”

In the first phase, the report recommends in the next year “the formal restitution of several largely symbolic pieces whose return has been requested for a long time by various African nations or communities.”

Topping the list are precious statues, palace doors and thrones that were plundered by French forces in 1892 from the royal city of Abomey in present-day Benin. They are among the most significant African objects on display at the Quai Branly Museum. Their restitution was requested by the president of Benin in 2016, and refused on the grounds that the French national collections were “inalienable,” meaning no part of them could ever be given away.

Other objects in France that the report says should be returned in this first phase are from Senegal, Nigeria, Ethiopia, Mali and Cameroon.

In the second phase from next spring until November 2022, French and African teams would, according to the proposals, carry out inventories of the French collections and share those digitally. The report recommends setting up joint commissions to examine restitution requests and advise on conservation, curatorial education and training. During this phase, “works judged to be important by the nation-states and communities concerned” should be restituted, the report says.

In the third and final phase, which is open-ended, African states that have not put in restitution claims already would be able to do so. “The process of restitution should not be limited in time,” the report says. “We should avoid giving the impression that the historical window which opened during the speech at Ouagadougou in 2017 is at risk of shutting again anytime soon.”