Compared to Jerusalem, or Vatican or Christ the Redeemer in Rio, Lalibela, a 12th century UNESCO World Heritage site (aka the ‘African Jerusalem’) is not really known to the world. When the typical western tourist thinks of Christianity, he or she usually visualizes a religion of Western Europe. Very few knows that Christianity took root in Ethiopia, long before it dominated Europe.

I believe that Lalibela has what it takes to become one of the world’s top Christian destinations on par with Jerusalem. Lalibela is the only World Heritage site where biblical traditions and scenes from the Old Testament can be experienced on a daily basis without the interference of globalization.

Because of its uniqueness and its symbolic connection to Jerusalem, Lalibela should have been a top destination for Christian tourists. However, despite its potential to attract millions of visitors, very few tourists are visiting Lalibela. Many factors could explain the low number of tourists, factors such as the lack of robust tourism marketing, the lack of world-class accommodation and the fact that Lalibela is an expensive destination. I was made aware that the entrance fee collected for the visitation of the churches is $50 USD per foreign visitor. 50$ USD is a lot of money compared to entrance fees in top tourist destinations around the world. Moreover, after paying such a huge price, tourists are shocked to witness that the local community in Lalibela is impoverished. This is a concern I share as an Ethiopian as well.

In my recent visit to Lalibela, I had observed that the majority including the youth seem to be living an impoverished and tough life. In other places of similar global heritage status, the local community has been organized and empowered to benefit socio-economically from the flow of tourism. I was informed that the Lalibela entrance fee payments were going directly in the coffers of the Orthodox Tewahedo Church without any taxation. I understand that the Church is tax-exempt and I believe it has the right to remain so. But I am also obliged to question whether the Church has met its humanitarian responsibilities in meeting the basic needs of the local population in Lalibela. I have been informed that the Church owns a few local businesses such as hotels and car rentals, but in my opinion that is not a sufficient investment as it creates limited employment opportunities when so much could be done.

As the Church is the biggest income earner of the town, the onus to develop Lalibela and create income-generating businesses should be the responsibility of the Church. The Church should be involved in training and empowering the development of sustainable small-medium enterprises in order to encourage more spending from tourists. The local community should be assisted in developing authentic activities and unique artisanal crafts.

For example, the following suggestions could be of interest to tourists:

• making injera in a traditional setting (it can be arranged that the tourist can taste the injera he/she made on the spot, if various stews are readily available)
• roasting and brewing coffee in a traditional manner (the tourist can roast his/her own coffee and take it home)
• promoting the new honey-museum and preparing tourist-friendly Honey Jars with sentimental labels such ‘Honey from Lalibela’ or ‘Honey from the African Jerusalem’
• Also, as Lalibela is known also for its honey-wine, tourists will be interested in buying tourist-friendly, leak-free bottles of honey wine
• Some tourists come to Lalibela on a religious pilgrimage and therefore, a special program should be available to those interested in participating in religious performances or religious meditation. For example, Sunday School students can organize a chanting performance, or teach about St Yared, the great Ethiopian composer, or give Geez lessons, etc…

Lalibela has so far been dormant in terms of economy. I am not sure it is intended or if it is destiny. Maybe is it because God in his mysterious ways, is keeping Lalibela modest and out of harm, by avoiding the corruption and exploitation that usually comes with mass-scale tourism? Maybe Lalibela is not destined to be materially rich in order to preserve its authentic spirituality? Maybe Lalibela is meant to be discovered only by those who sincerely seek it in faith…? What do you think?

For centuries, Ethiopia, whose mysteries have been drawing immense fascination from the outside world, has been attracting travelers from all over the world. Ethiopia is the only nation where the three Abrahamic faith (Judaism, Christianity and Islam) have been adopted since their earliest inception and Ethiopia has been mentioned numerous times in religious scriptures.

Ethiopia has also been mentioned in ancient books fundamental to Western Canon literature. Diodorus Siculus, a Greek historian from the 1st century BC, wrote in his book entitled Bibliotheca historica the following passage on Ethiopia, a passage that positions Ethiopia in the ascent of spirituality and civilization, a passage resonating with the new Ethiopian tourism brand: Ethiopia, Land of Origins: 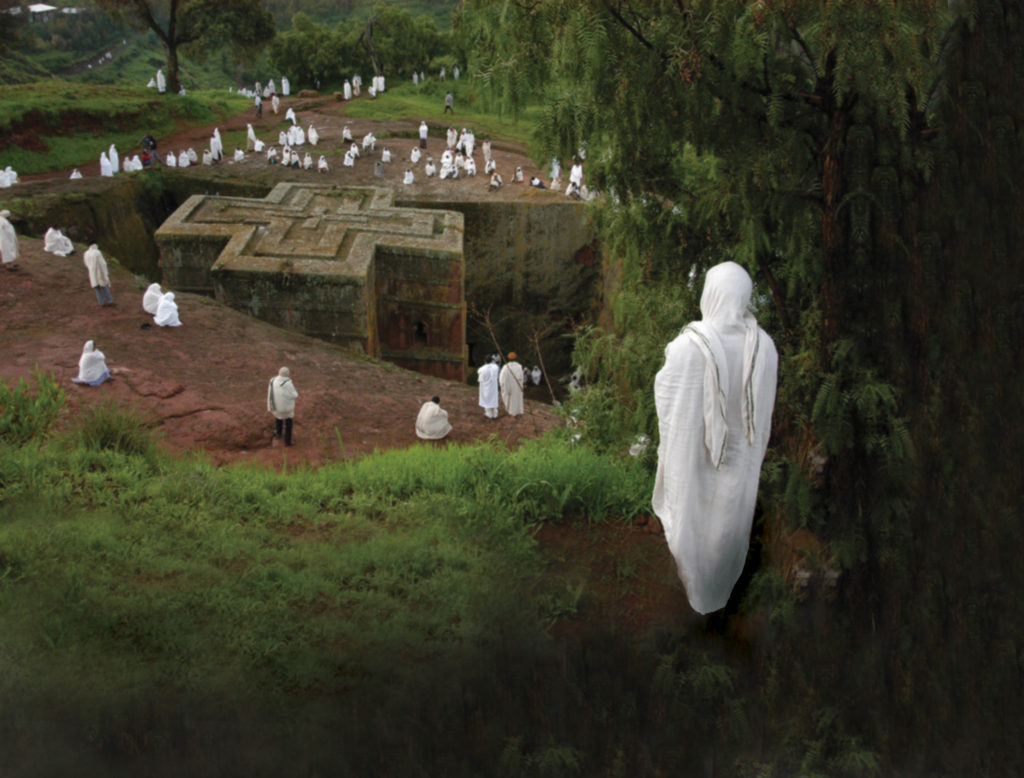 […] “Now the Ethiopians, as historians relate, were the first of all men and the proofs of this statement, they say, are manifest. For that they did not come into their land as immigrants from abroad but were natives of it and so justly bear the name of “autochthones” is, they maintain, conceded by practically all men; furthermore, that those who dwell beneath the noon-day sun were, in all likelihood, the first to be generated by the earth, is clear to all; since, inasmuch as it was the warmth of the sun which, at the generation of the universe, dried up the earth when it was still wet and impregnated it with life, it is reasonable to suppose that the region which was nearest the sun was the first to bring forth living creatures. And they say that they were the first to be taught to honour the gods and to hold sacrifices and processions and festivals and the other rites by which men honour the deity; and that in consequence their piety has been published abroad among all men, and it is generally held that the sacrifices practiced among the Ethiopians are those which are the most pleasing to heaven. As witness to this they call upon the poet who is perhaps the oldest and certainly the most venerated among the Greeks; for in the Iliad he represents both Zeus and the rest of the gods with him as absent on a visit to Ethiopia to share in the sacrifices and the banquet which were given annually by the Ethiopians for all the gods together:

For Zeus had yesterday to Ocean’s bounds
Set forth to feast with Ethiop’s faultless men,
And he was followed there by all the gods. 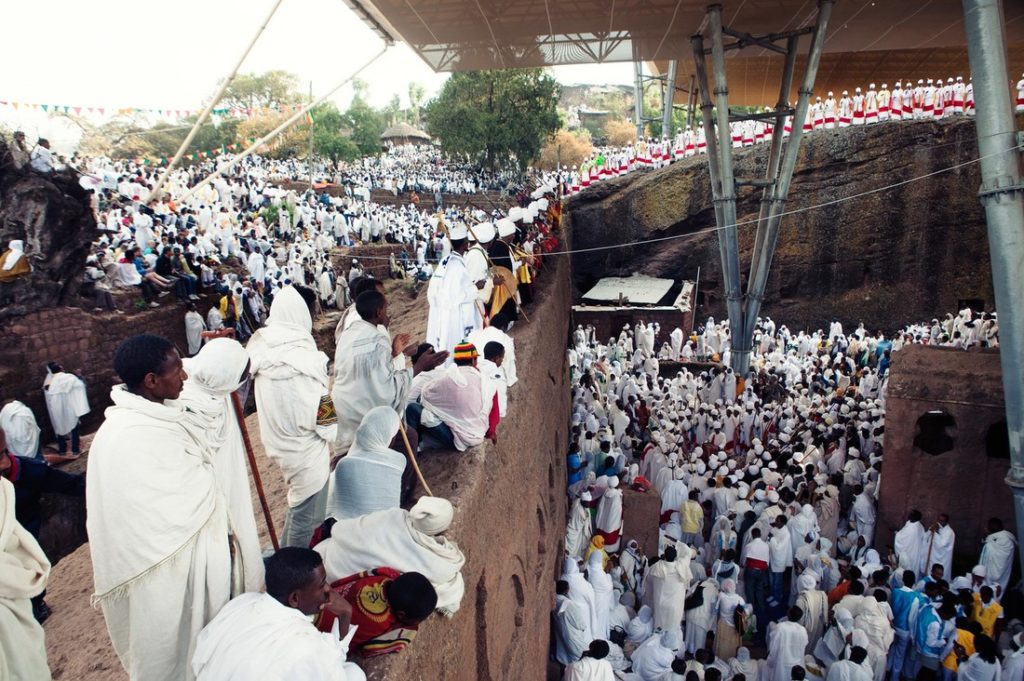 And they state that, by reason of their piety towards the deity, they manifestly enjoy the favour of the gods, in as much as they have never experienced the rule of an invader from abroad; for from all time they have enjoyed a state of freedom and of peace one with another, and although many and powerful rulers have made war upon them, not one of these has succeeded in his undertaking.”
[…]
They say also that the Egyptians are colonists sent out by the Ethiopians, Osiris having been the leader of the colony. For, speaking generally, what is now Egypt, they maintain, was not land but sea when in the beginning the universe was being formed; afterwards, however, as the Nile during the times of its inundation carried down the mud from Ethiopia, land was gradually built up from the deposit. Also the statement that all the land of the Egyptians is alluvial silt deposited by the river receives the clearest proof, in their opinion, from what takes place at the outlets of the Nile; for as each year new mud is continually gathered together at the mouths of the river, the sea is observed being thrust back by the deposited silt and the land receiving the increase. And the larger part of the customs of the Egyptians are, they hold, Ethiopian, the colonists still preserving their ancient manners. For instance, the belief that their kings are gods, the very special attention which they pay to their burials, and many other matters of a similar nature are Ethiopian practices, while the shapes of their statues and the forms of their letters are Ethiopian […]

I invite you to re-discover the origin of faith in Ethiopia. Lalibela is a good starting point as it is a unique World Heritage and a lasting monument to man’s faith in God.

5. Africa’s untapped business potential A rare look inside the daily life of a rural African tribe