St. Ephigenia, Princess of Ethiopia in the 1st century

St. Ephigenia was born a princess to the Royal House of Ethiopia in the 1st century. As a nation steeped in the paganism of the era, Ethiopia was to become witness to St. Matthew the Evangelist, who spread the Gospel there and converted much of the people.

Though we know little for certain about the events that transpired, an idea of her conversion and the efforts of the Apostle can be garnered from The Golden Legend, a medieval collection of stories about the many saints and heroes of the Catholic Church. This legend gives detail to St. Matthew’s travels in Africa; his story is closely bound to the Princess Ephigenia.

The Evangelist converts the Princess

St. Ephigenia was a princess of the Kingdom of Ethiopia when St. Matthew arrived and began to evangelize the people. Inspired by his words, she converted to the Catholic Faith and sought to consecrate herself to God. St. Matthew invested her with the veil, and she became leader of a group of some 200 virgins who also wished to consecrate themselves to the Heavenly Spouse. 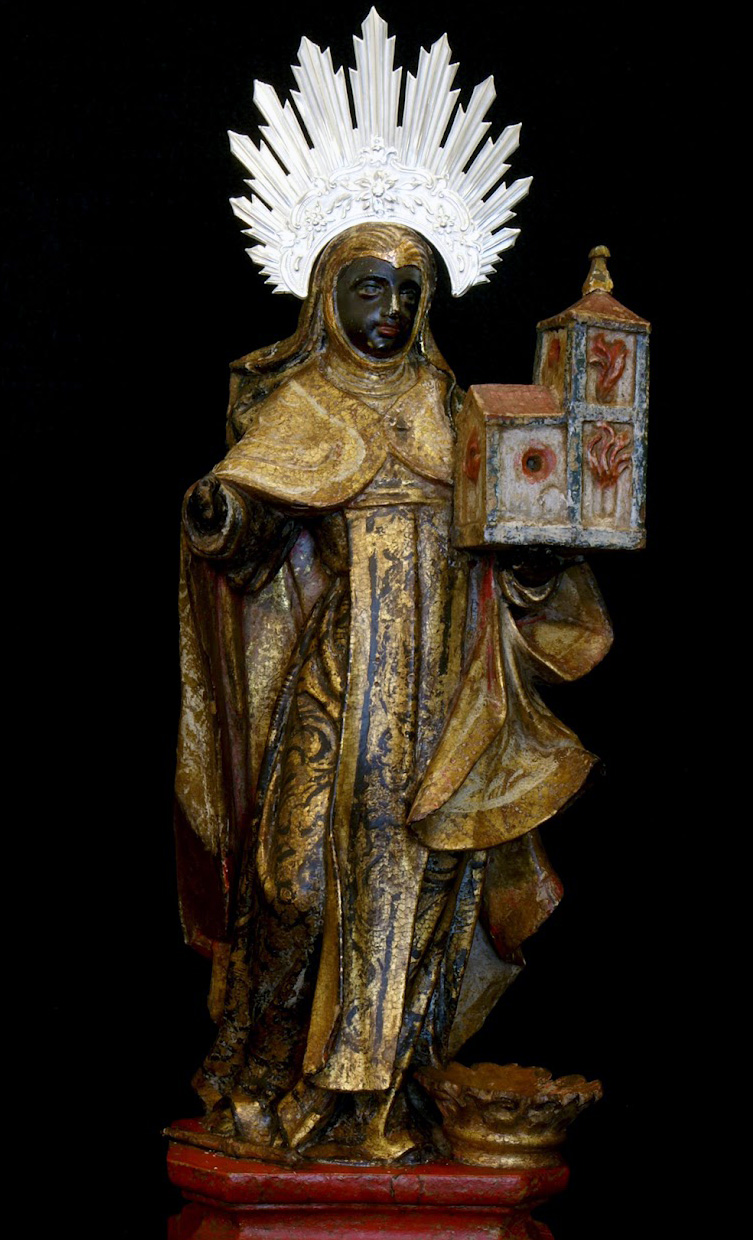 St. Ephigenia depicted with the burning Church she saved It was not long before the Devil sought to undo the good the Apostle had brought to this land, and the newly reigning King Hirtacus saw Ephigenia and desired her to be his spouse. When Ephigenia refused him, the King besought the Apostle to persuade Ephigenia to relent to his wishes. In response, St. Matthew told Hirtacus to attend Mass the next day. The King assumed that St. Matthew would oblige Ephigenia to marry him there.

At first, it seemed to go as Hirtacus expected. St. Matthew opened his sermon with a long defense of the nobility of marriage, how it was a good and virtuous Sacrament founded by Almighty God in Paradise and sanctified by Christ. At the end, the Apostle left a long silence before continuing and Hirtacus thought his moment had come.

Suddenly, despite expectations, St. Matthew stated that marriage was good, but that stealing another’s spouse was a crime. If it were wrong to violate marriage by stealing the spouse of another, how much more so was it wrong for Hirtacus, an earthly king, to try and steal the spouse consecrated to Almighty God Himself?

Hirtacus raged at this rebuttal, leaving the Church in a fury and ordering his swordsman to slay the man who defied him so. And thus it happened. St. Matthew was kneeling before the altar after Mass. A King’s swordsman entered and the Apostle was martyred.

Seeking to further avenge himself, King Hirtacus then ordered Ephigenia’s convent to be burned. The fires were starting to engulf the building when this noble Abbess prayed for help to her preceptor, St. Matthew. The Apostle duly appeared and blessed the flames, causing them to turn against the Royal Palace. Soon after, the King’s son became possessed and Hirtacus himself contracted leprosy and ended by committing suicide.

Beyond her relationship to St. Matthew and his martyrdom in Ethiopia little is known about St. Ephigenia. As an early Saint her case followed no formal canonization procedure. Following Ethiopia’s adhesion to the Monophysite heresy (Council of Chalcedon 451 A.D.) there was little contact between Ethiopia and Rome, leaving details of this early virgin Saint scarce. 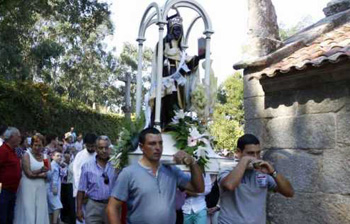 Yet, despite this apparent paucity of information, a strong devotion to St. Ephigenia exists today in the far-flung regions that once comprised the Portuguese Empire. When Portugal brought slaves from Africa to Brazil in the colonial period, there were many who had roots in the ancient Kingdom of Ethiopia.

Processions honoring St. Ephigenia in Brazil, above, and in Lima, Peru. 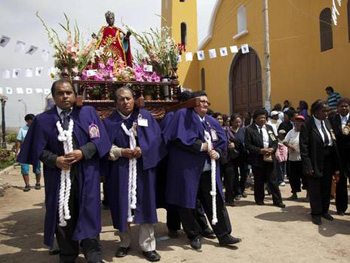 Today, many Brazilian Churches are dedicated to St. Ephigenia and processions honoring her are common. Devotion to this African Saint was also brought to Peru. She has been chosen as Patron Saint of many African-Brazilian brotherhoods and arts. Statues frequently depict her holding a convent in flames, a symbol of the religious house she saved through recourse to St. Matthew.

The end of St. Matthew

The martyrdom of St. Matthew came about because King Hirtacus refused to recognize the superiority of the consecrated state of virgins over marriage. The role of St. Ephigenia as the catalyst for the martyrdom of the evangelist St. Matthew is pivotal. Following the suicide of King Hirtacus, Ethiopia converted and many Churches were built. Tradition tells us that Ephigenia continued to lead the community of nuns for many years and that she died a peaceful death. 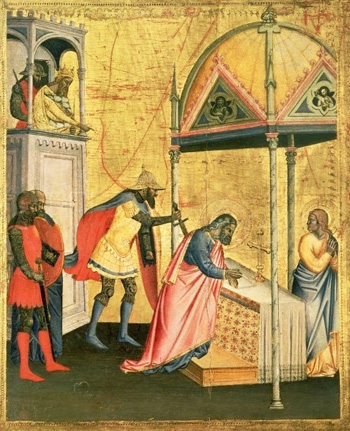 The martydom of St. Matthew depicted with St. Ephigenia St. Ephigenia is an archetype of the early acceptance of the Faith in Africa, providing a saintly and fervent example to the newly converted. Through her we have an illustration of the vocation of Africa, a Saint ready to embrace the Faith and defy worldly ambitions and barbarous persecutions.

It is very expressive to note that, with this example of St. Ephigenia, Africa stands as one of the first continents to accept the Gospel. All Catholics, no matter to what race we belong, are indebted to those first Africans who adhered to the Gospel of Our Lord Jesus Christ and helped to spread it over the world.

Let the life of St. Ephigenia inspire us with the same fervor and fidelity to our vocations. Like her, let us also stride for perfection and have no hesitation to have recourse to the saints, whose prayers before God so greatly excel our own. Let us give thanks to the great Apostle St. Matthew for his evangelization of Africa, and bringing us such examples of illustrious piety to emulate.

Ethiopian and Korean Airlines managed to turn a profit this year Regional integration: The Antidote Against Rivalries and Conflicts.

The Forces of Evil Arrayed Against Ethiopia