For many years,c crude oil has been a major revenue driver for most African countries. Across the continent, crude deposits are abundant. The African continent is home to five of the top 30 oil-producing countries in the world. It accounted for more than 7.9 million barrels per day in 2019, which is about 9.6% of world output. This level of production is down somewhat from the heights of 2005 to 2010 when African production was nearly 10 million barrels per day. The major production declines between 2010 and 2015 were mostly due to lower global oil prices. Output stabilized between 2015 and 2019. However, the global financial crisis and a production dispute between Saudi Arabia and Russia in early 2020 dramatically reduced oil prices. As a result, future levels of oil production in Africa and around the world were highly uncertain as of June 2020. Min

So, which of these countries produced the most crude in 2021?

As you should know, it’s one thing to have crude reserves in abundance and another thing to actually be able and willing to extract said crude. And since we are focusing on last year’s crude output, it’s interesting to see whether the countries with the largest volumes of crude reserves were also the ones that produced the most.

That said, below are the ten African countries that produced the most crude oil in 2021. For the sake of clarity, we compared data provided by both the Organisation of Petroleum exporting Countries (OPEC) and other reliable data mining companies. 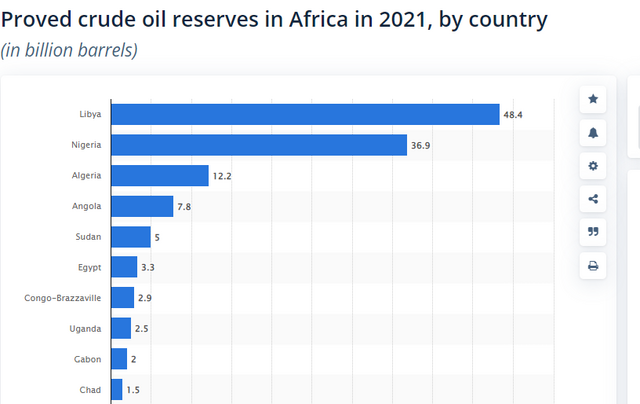 Nigeria produced more than 1.9 million barrels of oil per day in 2014 to rank as the 11th-largest oil producer in the world. The country produced around 2 million barrels per day between 2015 and 2019. Fluctuations in annual oil production, especially since 2005, can be attributed partly to security problems connected to violent militant groups in the country. Nigeria is home to the second-largest proven oil reserves in Africa. However, the U.S. Energy Information Administration (EIA) reports that security issues and other business risks in the country have reduced oil exploration efforts. Although this West African country was the largest crude producer in 2021, Nigeria production of much lower than what it produce 2 years ago. Nigeria’s average daily crude production was 1.27 million barrels.

The state-owned Nigerian National Petroleum Corporation (NNPC) is responsible for regulating Nigeria’s oil and gas sector, as well as developing its oil and gas assets. The NNPC relies heavily on international oil companies to fund development and provide expertise. Most large onshore oil production operations in the country are operated as joint ventures between the NNPC and private oil firms, with the NNPC as majority owner. Comparatively costly and complicated offshore oil developments are typically organized under production-sharing contracts. The terms of these contracts can be adjusted to provide appropriate incentives to international operators. The largest global oil companies operating in Nigeria include Chevron, Exxon Mobil, Shell, Total, and Eni.

Nigeria was followed by this Northern African country which produced an average of 1.21 million barrels of crude per day in 2021. Libya production of oil was almost 1.2 million barrels of oil per day in 2019, up more than 100% since 2016. This fantastic increase was primarily the result of a temporary reduction in armed conflict within the country. Furthermore, Libya was exempt from the 2016 OPEC production cuts because output had already fallen from 1.7 million barrels per day in 2010. Unfortunately, production fell dramatically in early 2020 as the civil war in Libya intensified. Despite its troubles, the country contains the largest proven reservesof oil in Africa.

As of June 2020, Libya was embroiled in a civil war between the Government of National Accord (GNA) and the Libyan National Army (LNA). International oil companies were active in Libyan oil production before the wars following the overthrow of Muammar Gaddafi. However, the future will remain cloudy until the instability is resolved.

This oil-rich country produced a daily average of 1.11 million barrels of crude, which is less than 300,000 what it produces two years ago. Angola produced over 1.4 million barrels of oil per day in 2019, continuing a trend of declining production. Angola was producing around 1.8 million barrels per day in 2015, but output decreased steadily during the rest of the decade. This decline was partly due to a cut that the nation agreed to as a member of the Organization of Petroleum Exporting Countries (OPEC). Angola offers access to abundant offshore and deep-water oil reserves in the South Atlantic. However, the development of these oil resources could be delayed by sharply lower oil prices in 2020.

This Northern African country produced an average of 959, 000 barrels of crude per day, that way off by at least 300,000 it produces just two years ago. Algeria produced approximately 1.3 million barrels of oil per day in 2019 to maintain its position among the top tier of African oil producers. However, production is down substantially since 2005, when Algeria’s output was almost 1.7 million barrels of oil per day. OPEC production cuts and a lack of foreign investment played major parts in the nation’s declining oil output. Algeria also exports substantial amounts of natural gas, most of which go to Europe.

Egypt: Egypt produced 559, 000 barrels per day, which is about 90,000 less than what it produces two years ago. Egypt produced about 630,000 barrels of oil per day in 2019, with output remaining remarkably steady. The country became much more stable between 2014 and 2019. Egypt is also the largest oil producer in Africa that was not a member of OPEC. On the other hand, the government’s pro-market reforms reduced subsidies for the oil industry.

6. Republic of the Congo

This country’s production output in 2021 stood at a daily average of 253, 000 barrels. Oil and gas discoveries in the east of the country give the DRC the second largest crude oil reserves in Central and Southern Africa after Angola.  These reserves are primarily located in the four major lakes bordering Tanzania, Burundi, Rwanda, and Uganda. The DRC has proven reserves of 180 million barrels, though estimates of total petroleum reserves exceed 5 billion barrels. Currently, Congolese oil production is limited to the Coastal Basin, yielding 25,000 barrels per day of offshore production, all of which is exported.

As of December 2021, crude oil production capacity in Ghana stood at 177 thousand barrels per day. The volume was below what was measured in August 2020, when the country’s capacity reached 197 thousand barrels per day. Since March 2020, the volume of crude oil that can be produced in Ghana has followed a downward trend. Nonetheless, oil production in the country reached 173 thousand barrels per day in 2020. In January 2021, revenue from oil covered 0.1 percent of the country’s Gross Domestic Product (GDP), and this reached zero and 0.1 percent in May and June 2021, respectively. In real oil monetary inflow, the country accumulated around 512.7 million Ghanaian cedis (GHS) in January 2021 (equivalent of 83 million U.S. dollars), while in May and June 2021, roughly no value and 620 million GHS (100.4 million U.S. dollars), respectively, were attained by the nation.

From oil export transactions made between entities in Ghana and the rest of the world, Ghana obtained 836.2 million U.S. dollars in the first quarter of 2021. The Balance of Payments on oil exports had stood at 784.6 million U.S. dollars in the third quarter of the previous year. On the other hand, in June 2021, no crude oil was imported into the country. Furthermore, prices of this product reached 73.35 U.S. dollars per barrel by June 2021.  Overall, the recent lower counts in crude oil production, capacity, revenue, and imports may be due to the impacts of the coronavirus (COVID-19) pandemic on the country’s economy. Hide

The average daily production output in this country was 71, 000 barrels for the year 2021. In the aftermath of COVID-19, Equatorial Guinea’s Ministry of Mines and Hydrocarbons (MMH) has set its sights on revitalizing its oil and gas sector by facilitating an influx of foreign capital and enabling operators to carry out capital-intensive E&P activities into 2022 and beyond. Yet the road to recovery has not been easy. The country’s Year of Investment campaign faced disruption from the pandemic, while still managing to sign up investors to its series of capital-intensive downstream projects. Crude production was also impacted by OPEC-led production cuts implemented in May and June 2020 that removed 9.7 million barrels of oil per day (bopd) from the global market, followed by additional, albeit reduced cuts that are still ongoing. As of June 2021, the country’s crude production stood at 100,000 bopd, a roughly 17% decrease from the 120,000 bopd produced at the start of 2020. In the face of global oil price volatility, slashed exploration budgets and mounting global pressure to move away from fossil fuel development, the MMH has centered its efforts on diversifying its energy industry to stimulate local job growth and generate alternative sources of revenue.

‘Drill or drop’ has been the leading policy of Equatorial Guinea, in terms of aggressively urging operators to kick-start drilling campaigns and issuing a new set of license holders following its most recent oil and gas bidding round, EG Ronda 2019. This year, the MMH targeted increased foreign capital and E&P activities, following its assessment of 2021 Work and Budget Programs. In December 2020, the MMH forecast foreign direct investment of approximately $1.1 billion in 2021, comprising $832.4 million in firm commitments and $370.6 million in contingent investment. As a result of increased investment inflows, the Central African producer expects a parallel increase in hydrocarbon production, supported by a new drilling campaign in Block G by Trident Energy that commenced in June 2021 and serves to offset declining production of the nearby Ceiba and Okume complex. The MMH has also established a new onshore drilling plan and preliminary studies to identify prospects in its underexplored, continental basins.

Production output was 70, 000 barrels per day for the year 2021. Chad ranks as the tenth-largest oil reserve holder among African countries, with 1.5 billion barrels of proven reserves as of 2018 and production of over 140,000 barrels per day in 2020. Petroleum is Chad’s primary source of public revenue, and around 90 percent of oil production is exported. Chad’s oil production is dominated by the China National Petroleum Company in Chad (CNPCIC), the ExxonMobil-led Esso Exploration & Production Chad Inc. (EEPCI) consortium, Glencore, and Taiwanese Chinese Petroleum Corp (operating as OPIC). Other oil companies are exploring new blocs. EEPCI inaugurated Chadian oil production in 2003 and owns a controlling stake in the 1,100 km Chad-Cameroon pipeline through which all Chadian oil exports reach the port of Douala, Cameroon. A joint venture between CNPCIC and the Government of Chad’s state-owned oil company, Societé des Hydrocarbures du Tchad (SHT), refines petroleum for export and domestic consumption at a 20,000 barrel-per-day refinery 40 km outside N’Djamena. Chad’s natural gas sector is nascent. Stranded gas is flared.

There are opportunities for petroleum exploration, production, and refining, as well as natural gas exploration. With oil majors increasingly focus on mega-projects, Chad’s moderate deposits are best suited for small and medium enterprises. Companies interested in oil exploration in Chad should contact the Minister of Oil and Mines directly with a detailed proposal and evidence of past experience. There are opportunities to contract for various stages of production

Do note that as of November 2021, the average price per barrel (Brent Crude to be specific) was $81.54. Meanwhile, Brent Crude (the benchmark price for global oil sales) is currently trading at $85.24 per crude according to information obtained from Oilprice.com.

Emmanuel Abara Benson is an experienced business reporter and editor with over five years work experience. He covers corporate Africa, analysing some of the continent’s leading companies and the economies in which they operate. You may pitch your stories to him at emmanuel.abara@pulse.ng. Don’t forget to connect on LinkedIn and Twitter

Ethiopia Urge WHO to Investigate its Director-General for his Misconduct and Dereliction of Professional Duties Modern Humans lived in Eastern Africa 38,000 years earlier than thought

How Africa’s entrepreneurs are handling the continent’s challenges: book

Who Speaks for Ethiopia? Voices from the Opposition