The county has a vibrant history of manuscript production spanning hundreds of years. Primarily written in Ge’ez, an Ethiopian liturgical language, the books and scrolls of Ethiopia have long been richly decorated— a tradition that continued through the nineteenth century. Manuscripts from Ethiopia are held in collections around the world, including in the collection of Beinecke Rare Book & Manuscript Library. The continual production and dissemination of these books and scrolls over centuries speak to a long and complex literary and religious history.

In the parlance of manuscript studies, “Ethiopic manuscript culture” addresses manuscripts containing texts written in Gǝʿǝz  (also called Ethiopic, Old Ethiopic) or Amharic, produced in the cultural framework of the Ethiopian Christian (Täwahǝdo) Church throughout its history.’ The vast majority of these texts are written on parchment and ‘Ethiopian Christian manuscript makers stress that they faithfully adhere to the use of parchment, in contrast to the non-Orthodox Christian, and Muslim craftsmen who produced their books out of paper’. There are over 500,000 manuscripts in Ethiopia that are housed in churches and monasteries.

Beyond their distinctive illumination style, these manuscripts are notable for their construction. Ethiopian books often use a different type of binding than typical of most codexes bound in medieval Europe. Chain stitching was used to unite the quires— a technique that forwent the thick cords or bands used along the spine of a book used in other types of binding. While the two manuscripts featured below were either never bound or are now separated from their original binding, Beinecke Ethiopic MSS 5 provides a wonderful example of chain stitching.

Beautifully rendered in blue, red, and gold, this leaf from an Ethiopian bible dates to the mid-fifteenth century. Written and illuminated on paper, the page is dominated by the distinctive round arch of Eusebian canon tables. These tables would allow a reader to compare the gospels of Matthew, Mark, Luke, and John and to locate points in the text that either aligned or differed. First developed in the fourth century, the tables were a consistent feature of Christian biblical manuscripts during the medieval and early modern periods:  crossing borders, languages, and even continental divides. The arch serves not only as decoration but also as an organizing device that is intimately associated with the Eusebian tables and is considered a standard element of their organization.

While previous example was made in the middle of the fifteenth century, this Ethiopian scroll is much newer— dating from the nineteenth century. Despite the relatively recent date of the scroll, it is a testament to an extremely long lasting and dynamic tradition of manuscript production. This scroll, written on parchment, contains a number of prayers and the names of saints in Ge’ez. While it appears that the scroll was first copied for Aksala Maryam, the name Walatta Gabra’el was later added. The image of an angel, probably Michael or Gabriel (detail to the left), and a talismanic cross accompany the text.

Results of the Hill Museum & Manuscript Library (EMML) project, begun in 1973 to photograph Manuscripts (MSS) in Ethiopia, include the availability at HMML of several thousand microfilmed manuscripts in Gǝʿǝz (and Amharic). Towards the end of Getatchew Haile’s first published catalog of Ethiopic manuscripts we come across a remarkable item, one among the five or ten most famous in the entire Ethiopian Manuscript Microfilm Library (EMML) project.

Garima 1 consists of 348 pages, beginning with 11 illuminated pages, including canon tables set in arcades, followed by the Gospel texts written in Ge’ez, the Ethiopic language of the Kingdom of Axum, which is the language of the Ethiopian Church. (Ge’ez script is one of the oldest alphabets still in use in the world.) Also written in Ge’ez, but by a different scribe, Garima 2 has 322-pages, including 17 illuminated pages, of which four are portraits of the Evangelists. The miniature painting which decorates both gospels is reminiscent of Byzantine Art, although this too is now thought to have been created in Ethiopia. Neither manuscript has a colophon. Significantly, the texts of the two Garima manuscripts are quite different; thus Garima 1, for instance, does not derive directly from Garima 2. (Note: The term “canon tables” refers to the system of dividing and comparing the contents of the four Gospels, which was used between late Antiquity and the Middle Ages. A summary typically appears at the start of the Gospels.)

The importance of EMML 1480 is multifaceted, and its provenance cannot go overlooked. When microfilmed nearly fifty years ago, it belonged to the monastery of Dabra Māryām in Eritrea. While tens of thousands of Ethiopic manuscripts exist in the ecclesiastical and secular libraries of that country (which, at the time, was a province of Ethiopia), microfilm or digital surrogate copies of less than a dozen of them are available to scholars. EMML 1480 is among those precious few. 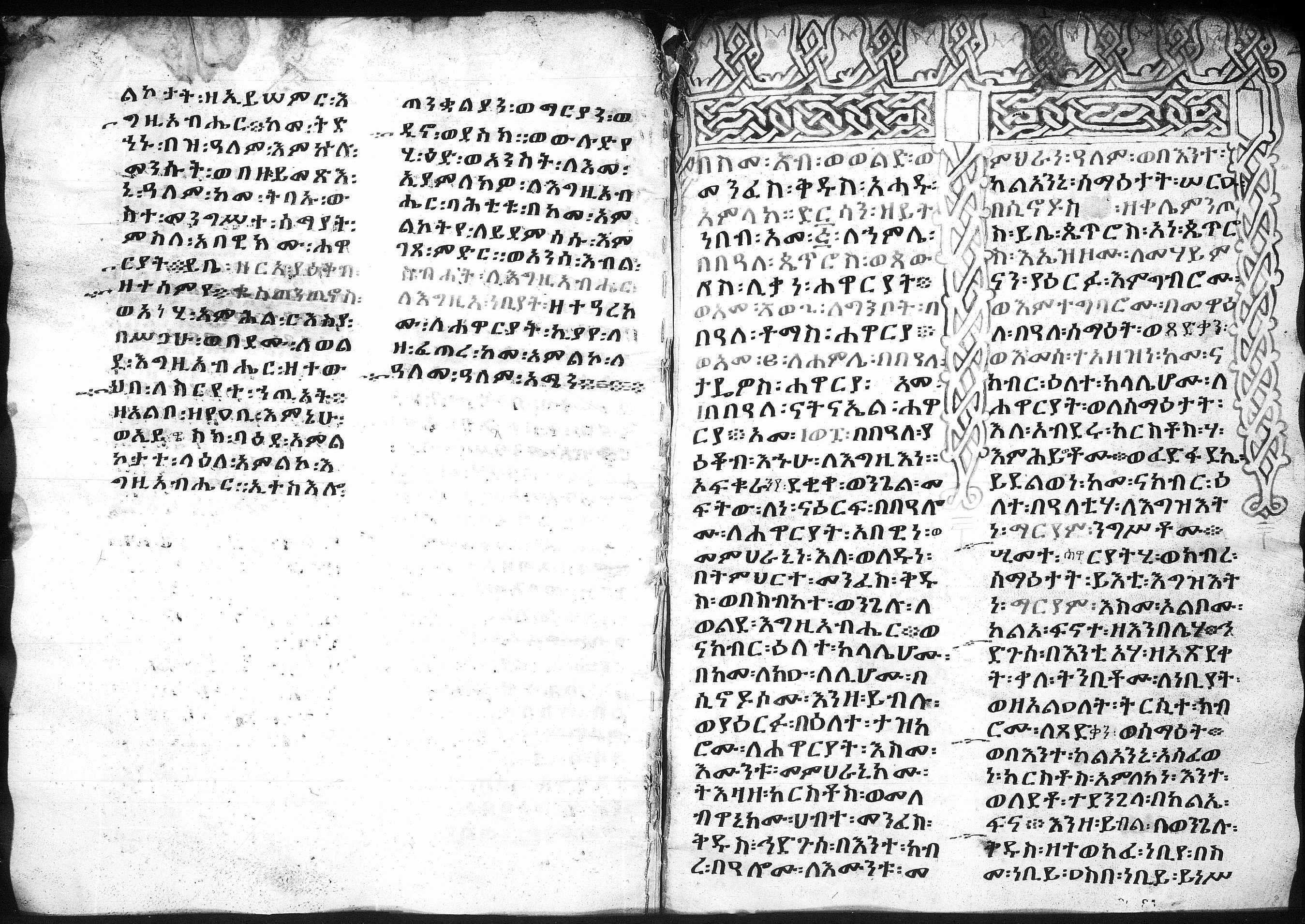 EMML 1480’s earlier history is also notable. While the circumstances by which the manuscript came to Dabra Māryām are unknown, it is clear that the codex was manufactured in the mid-fifteenth century during the 1434–1468 reign of Emperor Zar’a Yā’eqob, as numerous references to him as the contemporary king in prayers and supplications attest. In fact, it is possible that this particular volume was produced on the king’s personal orders, perhaps even at the royal camp.

This origin makes all the more significant the contents of EMML 1480 and their value, which would have been enormous even if in a manuscript from a much later time. Almost all documents are from Zar’a Yā’eqob, either composed by the emperor himself directly or by members of his royal clergy at his instigation in order to further his theological program. Since one ritual text claims to have been written in the eighth year of his reign, the manuscript can be dated to between 1442 and 1468. This narrow, quarter-century timeframe means that its witness to such texts lies only a few decades or years removed from their origins.

The proximity of this volume to Zar’a Yā’eqob spatially and temporally only begins to hint at its importance. Indeed, on more than half of its pages are writings yet to be attested anywhere else, among them several from Zar’a Yā’eqob, including his Ṭomāra Tesbe‘t (“Epistle of humanity”). Scholarship had long known this title, mentioned in several other Ethiopic texts, but had never had access to a copy of the work itself, which consists of a trio of tractates against magical practices and divination.

During his reign, Zar’a Yā’eqob sought to impose a particular form of religious orthodoxy across his dominions, attempting to eradicate divergent viewpoints and sects. Many opposed his positions, however, and in these writings, there are repeated references and other allusions to figures deemed heretical. These documents have therefore contributed enormously to our understanding of the religious controversies of the era (especially about the Trinity, the Sabbath, and Mary), some of the figures involved, and how Zar’a Yā’eqob tried to deal with them, especially in the ecclesiastical quarter.

On occasion, however, the historical insights provided by these unique texts are even more significant, for Ge’ez literature is principally religious in disposition, and indigenous sources on contemporary events are rare. One notable case appears in the middle of the Ṭomāra Tesbe’t, where a plot against Zar’a Yā’eqob by several nobles is described in extensive detail. This striking exception to the usual course of affairs hints that opposition to the despotic emperor and his religious reforms may have been widespread.

The significance of this material was well known to its cataloger, Professor Getatchew Haile, who devoted much energy in his early years at HMML to the publication and translation of unique texts from EMML 1480 so that they could be properly appreciated and integrated into future scholarship. Later on, in 1991, Getatchew would publish the entire Ṭomāra Tesbe‘t, the crowning achievement to more than a decade of work on this remarkable manuscript. 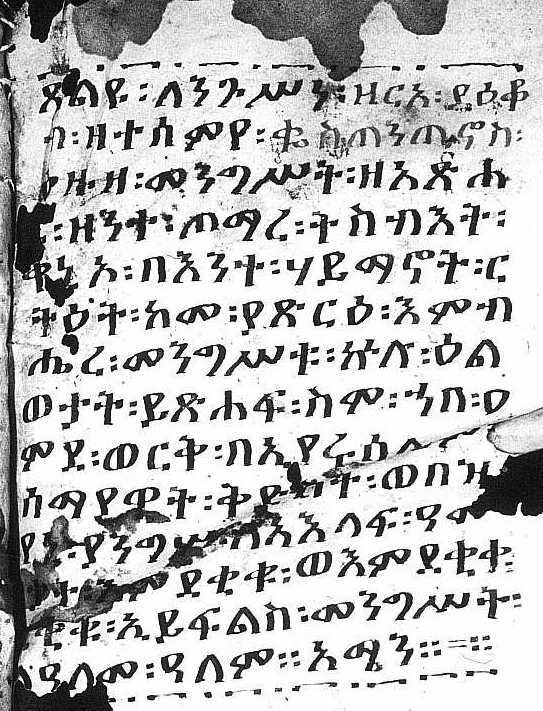 To conclude, my impression is that in general, in Ethiopia, members of the Christian Orthodox community will regard liturgical books (handmade or printed) as sacral objects intended for practical use, primarily due to their content which believers see as divine, secondly, due to the use for liturgical celebration, while repeating the same ritual treatment. The fact that all kinds of liturgical books can be found stored together with support this understanding. Yet, individually, people can have various emotional attachments and reasoning for their preferences. For now, one can see that printed books gradually enter the same matrix of ritual treatment, developed in the milieu of parchment manuscripts. At the same time, though belonging to a certain church or a person, all liturgical objects tend to accumulate more and more sacrality in the eyes of the believers, yet, one needs to investigate more in order to make this difference between various levels of sacrality tangible.

Getatchew Haile is an Ethiopian philologist and historian. After undertaking university studies in Cairo and Germany, he taught in the Department of Ethiopian Languages and Literature at Haile Selassie I University in Addis Ababa before joining the Hill Museum & Manuscript Library in 1976. His studies on modern and ancient Ethiopian languages and literature have been widely considered foundational to the field, with the significance of his work recognized through a MacArthur Fellowship (1988) and election to the British Academy (1987). A strong pro-democracy advocate, he has been highly active in the political life of his homeland both before and after his exile from Ethiopia.

United States of Africa: A dream that got Gaddafi killed at the hands of a desperate US The Ethiopian Media Authority Revokes Accreditation of The Unhinged Economist Reporter